The K-blogs are lighting up with the latest FAIL! coming out of South Korea's English education industry. Take a look at the picture below and see if you notice anything odd. 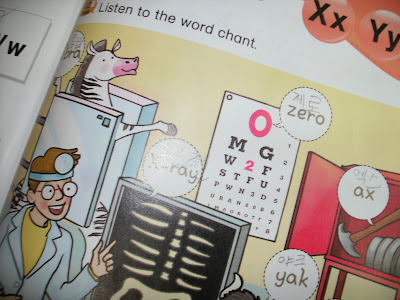 Full disclosure: When this was pointed out by Brian's regular This Is Me Posting, who was mockingly referring to Korea as "a bastion of quality when it comes to English teaching," I thought the "fail" was that they were using the numeral zero at the top of an eye chart (which wouldn't be very authentic at all for a number of reasons).

Only by looking at it for a couple minutes did I realize, oh, wait, it says "STFU"! And thus I wrote this comment:


I'm not sure who that reflects worse on, the naïve book illustrator who simply did a Google image search for a Western version of an eye chart (Korean ones, as most of us at Brian's would know, look quite different), or the jaded person who would think "STFU" is an appropriate thing to put on a t-shirt to wear in front of other people, possibly little kids.

I elaborated a bit when Brian was "obliged" to make an entire post out of this, especially since he (and others) were assuming (reasonably, I think) that a native English speaker, and probably an English teacher, was behind this:

As I noted in response, while it's true that there has been a seemingly endless supply of such people in the semi-professional proofreading field, I don't think this is an example of that kind of thing. I give you Exhibit A, a t-shirt created by anglophones in an anglophone company and bought by anglophones who wear it in whatever anglophone country that is: 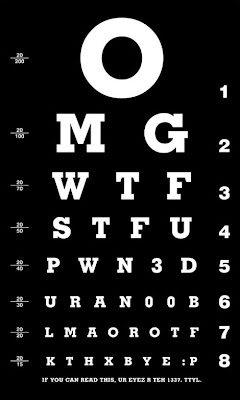 Notice the similarities with our textbook eye chart? Except for the T in WTF having been changed to a 2, it's the same set of letters.

Do a Google image search for "eye chart" and the rogue eye chart above is one of the top images that appear. If you do a simple Google search (i.e., not specifically an image search), it is the first (and largest) image that appears. An illustrator who is simply looking for a sample of a Western eye chart — which we all know are very different from Korean eye charts — could easily (and reasonably) think it's legitimate. Moreover, because it has what looks like a zero at top (which fits in with the lesson being taught in the textbook), it would seem like a natural thing for him/her to use.

The problem then, is not some rogue English teacher behaving badly, nor even a sloppy textbook illustrator or writer, but someone back in an anglophone country who thought WTF and STFU were appropriate things to have on a t-shirt worn around in public and, presumably, in front of children.

Brian amended his post with my comment, and noted that he thought my explanation was "far more likely." Glad to help.

At any rate, it's time that the K-blogs stop blaming English teachers for every little thing. If I'm the only one in their corner, God help the whole lot of them.

UPDATE:
I'd like to draw attention to the possibility that this FAIL is an even bigger ruse. The only two things that demonstrate this is from Korea are (a) the use of Korean characters written in pencil on the book, and (b) the use of word chant.

Word chant, in fact, is used in many countries, not just Korea, so that means nothing.

The scrawled words, on the other hand, indicate some relationship with Korea. Either the book is from Korea, or someone would have us believe it's from Korea. The writing is rather scrawl-like, which could indicate a very young native Korean speaker or an adult non-native speaker.

What's interesting is what is written. Zero, yak, and x-ray are written in their Hangulized equivalents (제로, 야크, and 엑스레이), which are also their proper Korean designations.

I could be wrong on that point, and even if I'm right, it's not implausible that a young Korean student might somehow get that word wrong. Not likely, but still plausible.

And thus we have another ripple.

Email ThisBlogThis!Share to TwitterShare to FacebookShare to Pinterest
Labels: English teaching in Korea