I wonder if I'll ever reach the combination of being old enough, feeble enough, and evil enough, that instead of sending e-cards or chocolate, the main activity on my birthday will be newspaper articles discussing what will happen when I leave my earthly shell. Probably not, but that's Kim Jong-il on the occasion of his 68th birthday.

Yesterday it was the LAT and this time it's from the Christian Science Monitor, written by Donald Kirk:


Mr. Kim, however, did not attend a birthday bash at which top officials from the armed forces, the Workers’ Party, and the government pledged allegiance to him. While recovering from a stroke, he appears to be focused on grooming his youngest son, Kim Jong-un, for power by taking him on visits to factories and military units.

“He has a clear objective of how to implement his strategy of survival,” says Paik Hak-soon, senior fellow at the influential Sejong Institute here. “Everything is being carried out, including the succession issue.” Despite health problems and economic setbacks, says Mr. Paik, Kim is “managing succession politics very carefully.”

As critical as the issue of Mr. Kim’s health is that of an economy severely depleted by growing shortages of food and supplies and a disastrous attempt two months ago to reform the near-worthless currency.

“We have no clear view about North Korea in the future,” says Bae Jong-yun, who teaches inter-Korean relation at Yonsei University here. “It’s militarily a strong country, but it could never be strong economically.”

To me, not showing up for your own party would be grounds for a brown parade. I hope she was worth it. Or they were worth it. Or you really were so sick you couldn't make it across the grounds without hurling.

Anyway, it looks like they're really setting things up for your son:


The party newspaper Rodong Sinmun called on citizens to “follow and trust our general to the end of this world,” while observers puzzled over how North Korea’s troubles would end.

A sign of Kim Jong-un’s growing power and influence was a report that he now controls the finances of the party – and was responsible for the ouster of top officials blamed for the failed currency reform. There have been reports of sporadic unrest since the currency was revalued by 100 to one, depleting the coffers of a small middle class.

Last year, says North Korea Open Radio, monitoring events in the North, he took charge of security agencies responsible for controlling a populace that has suffered from disease and hunger ever since a famine claimed 2 million lives in the 1990s.

Kim Jong-il's not exactly in his best condition, and his son's takeover is by no means a done deal, especially since the ruling apparatchiki probably know the truth about whether KJŬ really holds any power whatsoever. So this isn't a time for the Dear Leader to stay home and watch couples figure skating.

And no, I won't take pot shots at that guy because, well, we don't know that he has actually done anything evil. For all we know, he could biding his time, waiting for his father's death, plotting how to go down in history as The Gorbachev of North Korea™. 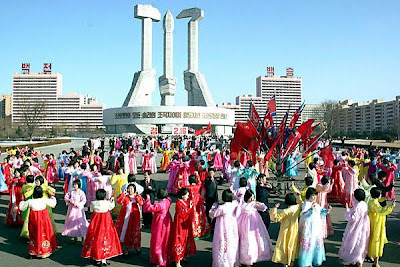 [above: North Koreans scared of starvation if they fall out of favor with the corrupt DPRK leadership gaily dance around Pyongyang's monument to the worker. Truth be told, I kinda like this statue, and I hope it's not one of them that gets toppled after KJI croaks and his son Kim Jong-ŭn is forced into exile at his Swiss boarding school alma mater. Ideally, the venue will be turned into a Pep Boys.]