Ohno gets disqualified after he trips up other skaters 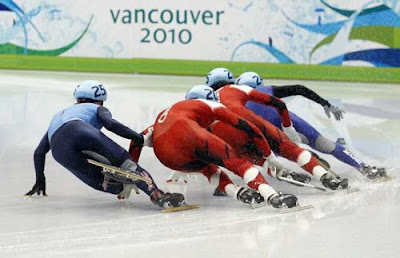 Well, karma has been noticing Ohno lately, enough that he hasn't yet been able to stretch that most decorated winter Olympian record yet:


Short-track speedskater Apolo Anton Ohno didn't add another medal to his collection Friday night, when he was disqualified for pushing in the final of the men's 500 meters at the Vancouver Winter Olympics.

My understanding is that the judges took quite a few minutes trying to decide whether to disqualify Ohno, or to strip the Team Korea of every medal ROK athletes have ever won at the winter Olympics. It was a close call, but Jim Hewish had gone out for a nosh, so they went with the former.

In the end, Canada's Charles Hamelin won the gold, Sung won the silver, and Tremblay the bronze.

Ohno has one more chance to win a medal later tonight, in the men's 5,000-meter relay, during which he will employ a three-pronged strategy of throwing up his hands in horror whenever someone passes him, using a crowbar on the knees of his worst skating threat right before the race, and dongchim.