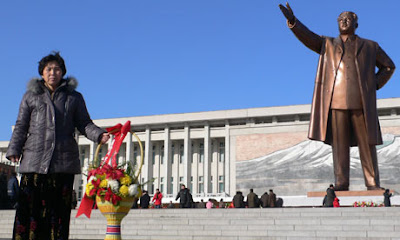 Well, that's what I'm assuming was the message the Guardian intended with their feature on tourist packages to North Korea that appears in the February 14 edition of whatever it is they publish. An excerpt:


The strangest of all the very strange things about the strangest place on earth, North Korea, is that it's surprisingly easy to go there. Or at least, not as hard as it somehow ought to be. I'd always thought that it was only marginally less difficult than going to the moon or, say, Eton, but my amazing revelation is this: type "North Korea" and "tourism" into Google, and you'll find Koryo Tours, a British-run, Beijing-based travel firm. A couple of clicks and a certain amount of cash later, and you, too, could find yourself on a vintage Russian jetliner heading towards the Democratic People's Republic of Korea.

It's impossibly exciting. And when Paul, the Australian sitting next to me, remarks, casually, that Air Koryo is considered unairworthy by the EU, it becomes, perhaps, just a little too exciting. But then some rousing martial music strikes up over a crackling intercom, and air stewardesses wearing what looks like jet-age vintage – white gloves, natty hats, red lipstick – bring around the in-flight reading material: the Pyongyang Times. The highlight of a recent firework spectacular, I learn, was a sky-writing display that read "Down With Imperialism", although the top story concerns a visit by Kim Jong Il to the new September 26 Breeding Pig Farm. "The country's economy is growing remarkably through a series of big events in the flame of the new revolutionary upsurge," he notes.

But then the flame of revolutionary upsurge is burning strongly among us, too. There are 21 of us, from all parts of the globe, most of us reasonably well-travelled, with the exception of Dan, a twentysomething Canadian, who has selected North Korea for his first ever trip abroad. ("No, Dan," I hear someone say, possibly myself. "In other countries, you are allowed to leave your hotel without being officially accompanied by a government guide."). And we're all as excited as puppies.

Because barely 1,500 people a year visit North Korea. Or, to put this in context, several thousand fewer than make it to the British Lawnmower Museum.

But unlike a visit to the DPRK, handing over your hard currency to the docents at the BLM isn't perpetuating unspeakable cruelty, misery, and suffering (as far as I'm aware).

I've always been torn toward visiting the North — where does it fall in the spectrum between slowly erode the hermetic seal or helping prop up the murderous regime? — and the writers don't even really address that. But at least their giddiness gives way to acknowledgement of the suffering that goes on there.