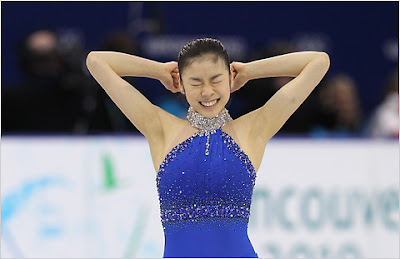 
Kim Yu-na put one hand to her mouth and let the tears flow.

All that pressure, so many expectations. The "Queen" took it all on and delivered royally.

The South Korean won the Olympic gold medal Thursday night, soaring to a world-record 228.56 points and shattering her previous mark by more than 18 points. It may go down as one of the greatest performances in figure skating history, and it's sure to set off wild celebrations from Seoul to Pyongchang [Kushibo notes that SI wrote it that way]. It's South Korea's first medal at the Winter Olympics in a sport other than speedskating.

Even Kim seemed to be dazzled by the show she put on, gasping when she saw the monstrous score. Coach Brian Orser gave a Rocky-like victory pump, shaking his clasped fists over each shoulder.

And to all those in South Korea who use international sporting events as a proxy for national prestige, congratulations to you, too, I guess. I can hear your whooping and hollering all the way over here.

But much more congratulations to Kim Yuna (金姸兒, 김연아 for those of you looking to see how her name is spelled in Hangul), as well as to Japan's Mao Asada of Japan who won the silver with 205.50 points, and Canada's Joannie Rochette who won the bronze with 202.64 points (and who has been through an awful lot, so this undoubtedly means an awful lot to her). 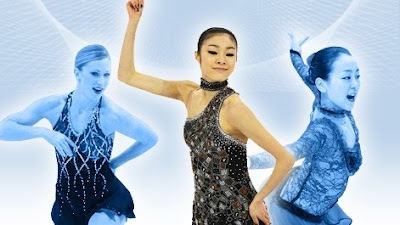 As the SI hints above, this kind of performance in a signature Olympic event could bode well for Pyongchang (aka Pyeongchang) in its bid to host the 2018 Winter Olympics.

The nearly seventeen-year-old Ms Nagasu will be back, as will South Korea's next skating star (?), sixteen-year-old Kwak Minjung, who came in at #13 with 155.53 points.

And can the bloodthirsty netizens just suck it up now and stop harassing Mr Hewish? Please? Just take the rest of the day off like everybody else in South Korea and drink so much beer and/or soju you can't make it back to your car.