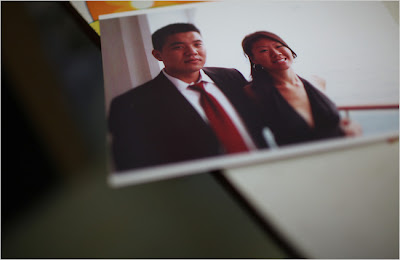 From the New York Times is an interesting story about Qing Hong Wu, an immigrant who came to the US from China at the age of five and who got caught up in a gang of muggers when he was fifteen. Heeding the advice of the judge who sent him to rehabilitation for three to nine years, he turned his life around. When he applied for US citizenship years later, the judicial system "discovered" his teenage arrest and now he is being deported. That is, unless the same judge can stop it:


The teenager, a gifted student, was pleading guilty to a string of muggings committed at 15 with an eclectic crew in Manhattan’s Chinatown. The judge, who remembered the pitfalls of Little Italy in the 1950s, urged him to use his sentence — three to nine years in a reformatory — as a chance to turn his life around.

“If you do that, I am here to stand behind you,” the judge, Michael A. Corriero, promised. The youth, Qing Hong Wu, vowed to change.

Mr. Wu kept his word. He was a model inmate, earning release after three years. He became the main support of his immigrant mother, studying and working his way up from data entry clerk to vice president for Internet technology at a national company.

But almost 15 years after his crimes, by applying for citizenship, Mr. Wu, 29, came to the attention of immigration authorities in a parallel law enforcement system that makes no allowances for rehabilitation. He was abruptly locked up in November as a “criminal alien,” subject to mandatory deportation to China — the nation he left at 5, when his family immigrated legally to the United States.

Now Judge Corriero, 67, retired from the bench, is trying to keep his side of the bargain.

“Mr. Wu earned his second chance,” the judge wrote in a letter supporting a petition to Gov. David A. Paterson for a pardon that would erase Mr. Wu’s criminal record and stop the deportation proceedings. “He should have the opportunity to remain in this country.”

In today's mix of law-and-order and anti-immigrant sentiment (at least as far as perceptions of crime are concerned), his chances may not be that great. I'm not so sure a one-strike policy against legal immigrants is such a hot idea; at the very least there should be allowances made for such turnarounds.