Apolo Ohno: "At the end of the race I was hoping for another disqualification kind of like what happened in Salt Lake City."

Irrespective of the guy's history of being a spoiler when it comes to Olympic skating events involving Koreans, I never liked Apolo Ohno. Maybe it's him throwing races (allegedly) to help his friends qualify at the expense of others. He just exudes a smugness that just rubs me the wrong way.

The self-satisfied little jerk is all over the online ads these days, too, which just makes matters worse. 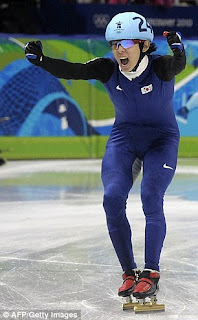 Anyway, it's things like the comment in the title that just reaffirm my gut feeling toward the guy. It came in relation to a crash at the end of the 1500-meter race that cost two South Korean skaters the silver and the bronze, but at least Lee Jungsu managed to get the gold. Expect national hero worship for years to come, Mr Lee.

UPDATE:
You can watch the NBC.com video of the race here (sorry, embedding apparently not possible). At about 5:35 or so, watch attention whore Apolo Ohno exude more class as he screams during the post-race television interview of his teammate, J.R. Celski, who overcame a serious injury to come in third.

UPDATE 2:
And here's the part where Ohno whines about not getting the gold. It's annoying when Korean athletes do it about Ohno, and it's annoying in the vice versa. "We wuz robbed!" talk so often just makes you look bad. You got lucky and won a silver, so just suck it up and shut up. Ditto with Lee Jungsu about your gold.

UPDATE 3:
Here's a roundup of my thoughts (so far) on this controversy and others related to the Korea-versus-Ohno rivalry.