Where are they now: Kim Dong-sung

Since the ROK-Ohno rivalry is fresh again, I thought I'd do a little focus on the person who was disqualified and lost his gold medal to Ohno, which sparked the anti-Ohno hate fest at the 2002 Salt Lake Winter Olympic Games.

That would be Kim Dong-sung:


After playing a reluctant role in one of the most controversial races in Olympic history seven years ago in Salt Lake City, South Korean speedskating star Kim Dong-Sung vowed never to return to the United States.

Kim was in the middle of celebrating what he assumed was his gold medal victory in the 1,500 meters when he learned he had been disqualified for interfering with U.S. star Apolo Anton Ohno, who ended up receiving the first-place medal. Kim was so upset he needed oxygen in his hotel room that night. The South Korean delegation challenged the result, then threatened to boycott the Closing Ceremonies. Some 16,000 angry e-mails from South Korea crashed the U.S. Olympic Committee's computer system. 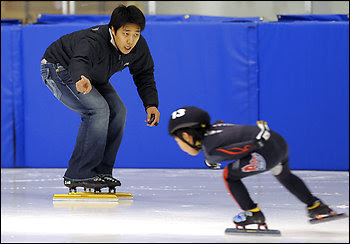 But there he was this week at the Kettler Capitals Iceplex in Arlington, wearing baggy jeans, a navy coat and gold-bladed skates, chasing speedsuit-wearing American children around the ice during an evening practice session. "Push, push, push!" he exhorted.

Kim's life since the 2002 Winter Games has unfolded with all of the unexpected twists of a typical final in short-track speedskating. Agonized at hearing the U.S. national anthem seven years ago, Kim now wants to ensure it is played. He aspires to create a U.S. Olympic champion in the Washington suburbs.

Ten of Kim's students will compete next weekend at the sport's national age-group championships in Midland, Mich., a competition that will help Kim evaluate his students' progress and his own proficiency in a profession he didn't consider pursuing until just more than two years ago. That's when a Maryland speedskating parent who heard he was in the country called him up and invited him to coach.

"I came here not as a player, but as a person looking for a future career," Kim, 28, said partly through an interpreter before the start of Tuesday's training session. "I didn't even bring my skates."

Now he doesn't plan to leave.

"My goals have changed," he said. "I want to make a national team member out of one of my young kids."

Anyway, it's good to see Mr Kim put all that nastiness behind him. He may or may not have justification to have been bitter at the time, and it may or may not have been controversial, but for him there's no reason to keep dwelling on it. I'm happy to see he's doing some good with his talent for skating.

Email ThisBlogThis!Share to TwitterShare to FacebookShare to Pinterest
Labels: skating