Not taking a page out of the 1988 Seoul Olympic playbook

Two decades ago, when South Korea was planning to use the Olympics to showcase the country's complete turnaround from basket case to a country knocking on the door of the advanced nations' club, the last thing people authorities in Seoul wanted people to see was homeless folks and anything remotely resembling a shantytown. The homeless were supposedly given one-way bus tickets to the provinces and ancient homes along the brand-spankin' new highways were razed.

Well, it looks like Vancouver has decided to buck that trend, according to the Los Angeles Times, at least so far:


For many in this city that prides itself on its social contract, Bergman's horrifying death was the last straw. The government announced the opening of five emergency shelters, 14 new permanent public-housing developments and plans to purchase and revamp 25 inner-city hotels. The British Columbia parliament passed a law giving police more power to get endangered people into shelters.

But with the Olympic Games approaching, there were widespread predictions that the police, as is often the case in host cities, would round up the homeless in a final cosmetic hose-down before the dignitaries swept into town.

"I swear to you on my mother's grave, that is not going to happen," Lemcke pledged to an activist recently. "We will protect the rights of people down there, and the world will see what the world sees on the downtown Eastside. The world needs to know."

What's interesting to me is that Vancouver's homeless problem is due to reasons similar to the US's:


Vancouver had little or no homelessness problem 15 years ago. But Canada, like the U.S., moved to deinstitutionalize the mentally ill in the 1980s -- and like the U.S., it provided few follow-up assistance programs. At the same time, the federal government got out of the business of building public housing, transferring responsibility to the provinces.

"People are kind of getting used to [homelessness], thinking, well, it's like prostitution or robbery, we're never going to be able to solve it," said Jill Davidson, the city's assistant housing director. "Well, we can solve it. Because we had it solved only 15 years ago."

That's an encouraging message, but it requires that we actually spend some money to make it happen. I've lived in two places where homelessness was an issue — Seoul, which didn't have many but where little was done to help, and Honolulu, where homelessness is pervasive, especially along the beaches and downtown — and it just seems like average citizens don't care about the people involved.

And while we're at it, kudos to Vancouver for not trying to cover it up. 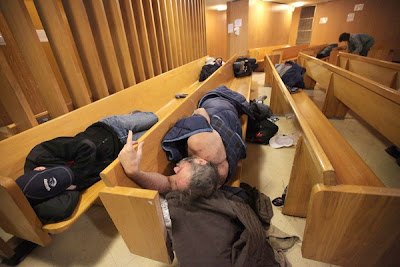 [above: Some of Vancouver's homeless sleeping in a church converted into a shelter.]