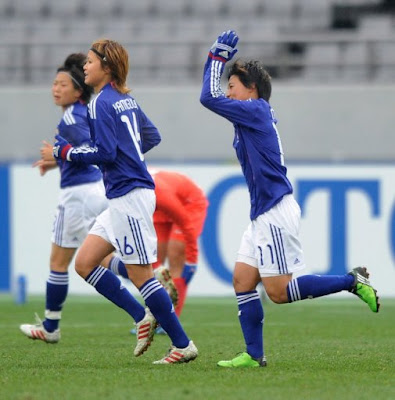 Well, if you're either a women's soccer fan or a sports jingoist who thinks that national pride and geopolitical stature rest on the performances of the country's athletic teams, you won't be happy with this result. Japan's women's team beat South Korea's, 2-1, to win the East Asian Football Championship:


"We kept the momentum until we scored two goals, while South Korea were still tuning up. But after that, they started to play more aggressively and it became a difficult game," said Japan coach Norio Sasaki.

Japan got off to a flying start when Ono received the ball in the Japanese field and then dashed forward, getting past the Korean defence line into the area to fire a sizzling shot for the first goal in the seventh minute.

The home side quickly made it two up when Ono sent a straight pass to midfielder Mami Yamaguchi, who hit home into the right side in the 17th minute.

South Korea started to play much better after the break, starting with Cho So-Hyun's header that went wide, and almost controlled the game until the end.

The People's Republic of China defeated Taiwan, 3-0, thus proving the supremacy of the One-China Policy and justifying Beijing's attempts to squelch Taipei's attempts to assert the rogue province as a nation on part with other nations.

Wow. Who knew sports could be so geopolitically useful? Anyway, the men's championship will be held tomorrow, when the South Korean national team will defeat the Japanese team on their home turf in front of a television audience of tens of millions of ROKers snowed-in on a major holiday, thus proving that Tokto is eternally and irrevocably the territory of Korea.

Email ThisBlogThis!Share to TwitterShare to FacebookShare to Pinterest
Labels: Are you ready for some futbol?, Tokto