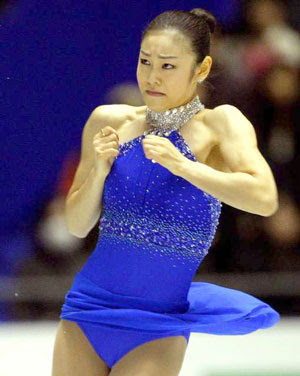 As we inch centimeter closer and closer to the Winter Olympics in Vancouver, expect more stories like this:


In 1988, the only other time the Winter Olympics were in Canada, Orser was the country's best hope for a gold medal. He won a silver, and Canada got no gold, making Orser want to apologize to the country.

Now he is Kim's coach, the one about whom South Korean newspapers have written, "Coach Orser is the savior." Said Kim's agent, Michelle Ha: "Brian is the most popular foreigner in Korea."

In four seasons with Orser, Kim, 19, has become far more than the first Korean figure skater of any renown. She is a superstar of such proportions that Seoul street caricaturists trying to lure customers display her image to show their skill.

No figure skater ever has been more celebrated in her home country than Kim is.

"I don't really know why [the Korean people] love me," Kim said. "Maybe it's because figure skating isn't just about who won, it's also artistic.

It's because you come across as cute and have an innocent air about you, you symbolize a hard-working ethic people admire, you represent Korean supremacy in something the whole world watches, and yeah, because figure skating is kinda cool to watch every four years.