Um, that would be China. The answer we were looking for was China. 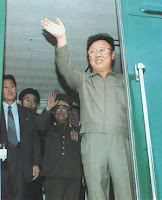 Bloomberg is quoting a Mainichi Shimbun story (which I couldn't find in English, but here it is in Japanese) saying that North Korea's Dear Leader Kim Jong-il will likely be visiting China later this month, in what will be his first "overseas" trip in four years (though he's not actually going over the sea, just overland, and he'll be flyin' in Rail Force One):

China, North Korea’s biggest political and economic ally, is the only country for Kim’s communist regime to reach out to for support as the U.S., Japan and South Korea increase pressure on the North to return to nuclear disarmament talks, said Park Joon Young, professor of international relations at Ewha Womans University. North Korea may also need more help from China to prop up an economy hurt by United Nations sanctions on cross- border financial transactions.

“Kim Jong Il would have to show commitment to returning to international dialogue if he wants to get China’s support,” Park said in Seoul. “Kim’s China visit, which is highly likely, heightens the prospects of the disarmament talks resuming.”

Hey, there, all you disgruntled DPRK apparatchiki who have lost your life savings because of this mook: this would be the perfect time for a brown parade! Just sayin'.