Guus Hiddink to coach a Korean rival at World Cup?!

It is the stuff of science fiction and Dan Brown novels: matter comes into contact with antimatter, and everything goes kablooey. So it would be, too, if Guus Hiddink, the coach of ROK's 2002 World Cup team and a demigod in the pantheon of Korean patriots (he is an honorary Korean citizen), were to coach a team that went up against Korea, Republic of. 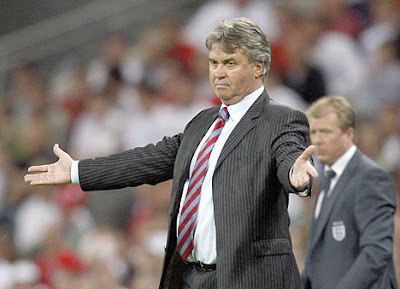 But that could happen (emphasis on could): The team for Côte d'Ivoire (no, that's not a made-up country; it used to be called Ivory Coast, before they realized the French name sounded cooler and more elephant-friendly) has been trying to get the Vying Dutchman to coach their team in the upcoming World Cup, to be played in South Africa in June.

The truth is, though, that the likelihood of a ROK-Cd'I matchup is unlikely. South Korea is in Group B (with Argentina, Nigeria, and those euro-mucking Greeks), while Côte d'Ivoire is in Group G (with Brazil, Portugal, and North Korea). Both would have to make it out of the first round alive, and then the second round. If they faced each other, I don't think it would be until the semifinals, and the likelihood of them both making it is not great — especially since only one team has Guus Hiddink on their side.

And that's good for Guus Hiddink, who probably enjoys his lifetime free trips on Korean Air, the massive amounts of money he still makes on product endorsements, and just being a demigod worshiped by tens of millions of South Koreans.

But Côte d'Ivoire will face North Korea (for those of you in Rio Linda, that's the evil one). And they will do so on June 25, 2010, exactly sixty years (one sexagenary cycle) from the start of the Korean War. So it would be oh, so cool, if honorary South Korean Guus Hiddink's team kicked North Korea's ass that day.

Ah, and wouldn't it be wonderful if on that day — on which the DPRK leadership will be convincing the North Korean people the South Koreans and their evil American puppet masters invaded the North in a battle that horribly backfired for them — the people of the North got a taste for how vacuous their government's words are and they all rise up. Or a brown parade. Either/or. 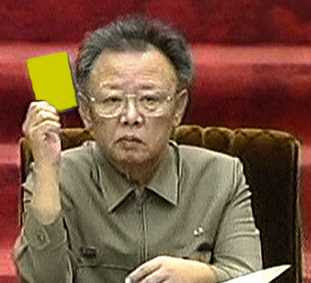 [left: Kim Jong-il's evil plan to win the World Cup involves disguising himself as a referee and ejecting all the opposing teams' players one by one.]