Do Chinese sheep dream of being jingdroids?

The New York Times has an interesting article on the culture of hacking in China. An excerpt:


In addition to independent criminals like Majia, computer security specialists say there are so-called patriotic hackers who focus their attacks on political targets. Then there are the intelligence-oriented hackers inside the People’s Liberation Army, as well as more shadowy groups that are believed to work with the state government.

And what do the patriotic hackers focus their socialism-with-Chinese-characteristics thoughts on? Their main political ideology being to make Korea look bad, ridiculous, stupid, and inhumane so that China and its system of extinguishing independent political thought that might threaten the Beijing regime will look good by comparison.

Some of them, of course, are also focused on things like this (where I'm still #23 in the world, baby! In your face, MetaProscrastination!). 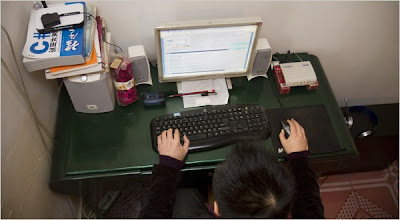 [above: This Chinese hacker should concern himself less with historically subservient Korea's insolent behavior toward Big-Brother China, and worry more about scoring some Rogaine™ for that budding bald spot.]