NYT and BBC: The guy responsible for the currency revaluation in North Korea is sacked, while markets are allowed to reopen

Perhaps the DPRK leadership really does ready my blog (here and here) and One Free Korea, among others. The disastrous Great Currency Obliteration has been deemed a failure — North Koreans apparently don't like seeing their savings wiped out, nor their ability to feed their families as the markets disappear, such that they're actually attacking the authorities.

It would appear that means the Dear Leader's son will no longer get credit for this great financial move, and instead Park Nam-ki, the person actually responsible (or so we're led to believe), will have to take the fall. The NYT has the story here, but the next bit is from the BBC:


Pak Nam-Ki, the Communist Party's director for planning and finance, has reportedly been absent from public activities since early January.

South Korea's Intelligence Service said it could not confirm his sacking.

But an intelligence official told the Associated Press news agency it had been closely monitoring Mr Pak's whereabouts and he had recently disappeared from view.

Yikes. Now I wonder if "sacked" means something more severe to them than it does to me. 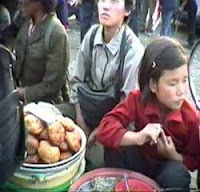 Good news for North Koreans looking for something to eat, however, comes from the Daily NK, which reports that North Korea is lifting the bans on the markets due to popular discontent with Pyongyang's policies:


In an attempt to avert a food crisis and stem popular discontent, the North Korean authorities have reportedly bowed to pressure and started lifting market regulations across the country.

The decision, which apparently came into force at the start of February, may seem to be an abrupt one, yet it is largely inevitable. A food crisis has seemed to be on the cards for a while, while acts of violence against security officials have been occurring with increasing frequency and discontent among the people has been rising rapidly since the currency redenomination at the end of November.

An inside source reported the news to The Daily NK on Tuesday, saying, “Since February 1st, in Yangkang and Hamkyung Provinces, jangmadang regulations have been completely lifted. The price of rice, which had been more than 400 won, has now stabilized at between 250 and 300 won.”

The source added, “It is a good thing that the jangmadang is open. We were worried about a coming crisis as the rice price has been soaring and we have not been given any wages. That said, the people are watching the authorities’ next move, so they are still reticent to trade.”

Pyongyang has been given the choice: (a) staying the course, which might have cause discontent to grow more violent and brazen as we trudge through the rest of winter and into the spring, even to the point of endangering the regime; or (b) permitting the markets to operate, which undermines their authority and may cause a slow erosion of the regime's hold on the people's lives, which could bring about long-term endangerment of the regime.

Clearly choice (b) staves off the immediate threat (if the news is true), but maybe not entirely. People are still angry because their savings are still gone. All that has changed really is an upward tick in their ability to feed their families, but they have now been emboldened that anger and violence directed at representatives of the regime is an effective tool. That alone may be a game changer. Stay tuned.

Email ThisBlogThis!Share to TwitterShare to FacebookShare to Pinterest
Labels: The Great Currency Obliteration of 2009