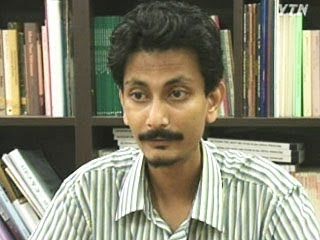 BBC News is reporting that Mr Park, the infamous ajŏshi who yelled "Arab! Arab!" and other obnoxious things at Sungkonghoe University professor and Indian national Bonogit Hussain [above] and his female companion, has been fined one million won.

This is being billed as the first conviction in the country involving racist remarks against a foreign national, and the 31-year-old Mr Park could have faced a two million won fine and one year in prison. I'd say he got off easy.

That's right, one million smackeroos for being an a-hole. About this case, I can understand and respect, say, The Marmot's take that it might not be a good idea for South Korea to bring back the language police:


Anyway, good luck with your case, Mr. Hussein — I don’t think “any behavior and language looking down on foreigners” should be illegal, mind you, but people can’t be harassing other people on a public bus, either. Would be keen to know more about the charges being pressed, though. Would also be keen to know what the police have to say, so I hope the KT stays on the story.


But on the other hand, I like the idea that the authorities have come down firmly against people in the "vocal fringe," at least in ethnic matters:


Since I'm also a strong believer in the idea that the vocal fringe is able to run roughshod over a more moderate majority that is afraid of being the sole voice speaking up against something they disagree with, I think it also emboldens those who see the behavior of a Mr Park to speak up and say something on behalf of people like the good professor, some dark-skinned 3D worker, or an English teacher just out enjoying the weekend with his girlfriend.


Indeed, Mr Park's words and behavior may no longer be seen as okay or normative.

Of course, there is a fine line between words that are protected speech and actions that create a public nuisance or hazard. My hat's off to those who will have to figure that one out.