BREAKING NEWS: Obama didn't go to Berlin to mark the 20th anniversary of the Fall of the Berlin Wall! 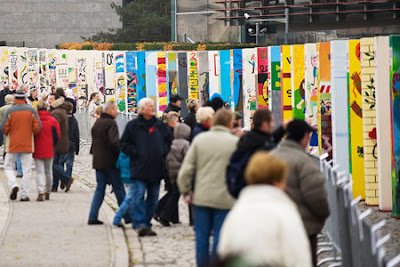 [above: Where the fu¢k is Obama in this picture?! He's going to miss the domino show and Tokio Hotel— is that guy a man or a woman?!]
I first learned about this controversy over at One Free Korea. Apparently some people in America are upset that President Barack Hussein Obama did not go to Berlin to participate in the celebration of the twentieth anniversary of the fall of the Berlin Wall and the end of communism in Europe and the Cold War (well, not everywhere).
They are saddened and/or angry that Obama did not witness for America the knocking down of wall piece mock-ups that were to be knocked down like dominos. Hmm... dominos... communism... I'm vaguely recalling something about the domino theory of communism... ooh, the irony.
And apparently it's an ominous sign of Obama's shortcomings, or worse. OFK commenter JCS wrote:

I was shocked — shocked! — that BHO would so blatantly tip his hand and reveal his love of Marxism and his sadness at its demise (well, not everywhere). I immediately went to the Time archives to read up on whether past presidents Bill Clinton and Bush43 had visited Germany during the anniversary celebrations of 1994, 1999, and 2004. I couldn't find anything in the archives, so I'm assuming that Bill and George did go, and that is why their trip and speech and all that was not reported: it was a non-event. Of course they would go.
Obama needs to save his presidency, and fixing this problem is a way to solve this. But first, we need to lay some ground rules. If Obama had gone this year, would he be off the hook for the golden anniversary celebration in 2014 (assuming he's still president then)?
Please, professional Obama bashers (Obashers?), help me understand which anniversaries of milestone events are important. Is the 30th important? That's a nice, round number, so I'm guessing it is. But then how about the 35th or the 45th?
Obama did make it to France for the 65th anniversary of the D-Day landing, so is the 65th especially important, but then what about all those other ending-in-five anniversaries that aren't 25th and 75th? Man, this is confusing. You'd think that a detail-oriented man like Obama would have been on top of this.

I guess I'm just as naïve as the President. When I first heard on my iPod during my daily jog that Secretary of State Hillary Clinton had gone to represent the United States on the china anniversary of the fall of the Berlin Wall, I thought to myself that that would make sense since. After all, in addition to Hillary being a well-known and popular figure over in Europe, as well as a high-ranking member of the US government, Obama himself was going to the actual China.
I mean, maybe he was too busy working on real-world stuff, like funerals in Fort Hood and preparing to travel to summits with East Asian leaders, to watch the dominoes of anti-communism fall and then tell the people of Berlin that he's a jam-filled pastry. 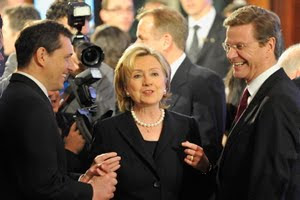 Oh, sh¡t! I just realized something. Maybe this is, like, one of those distractions of the public generated by the privileged elite that are meant to draw attention away from actually important issues of the day, like major health-care legislation, the POTUS talking free trade and security with East Asian leaders, or... other stuff.
Fu¢k me! I've been duped twice today.
on November 13, 2009