Korea news links for November 12, 2009: Tensions running high all around

Tensions are high in the Yellow Sea, where ROK sent more of the navy to be on guard for further provocations by DPRK boats, even as Seoul (and Washington) insist that things should remain business as usual with North Korea.
But the tension off the west coast is small potatoes compared to the tension felt by thousands of wee ones as they waited in line to get poked with a needle in order to vaccinated for H1N1. "We have to hurt you to help you." Phht... what child believes that?!
And for the older kids, namely the ones who will be finishing high school in a few months, tensions are high as they prepare to face down the CSAT (Collegiate Something Something-beginning-with-A Test... all I know is that the "C" does not stand for Corea; thank God, otherwise I'd have a frickin' aneurysm every time I saw that), also known as the Sunŭng. Good look, Cho Jaesu! 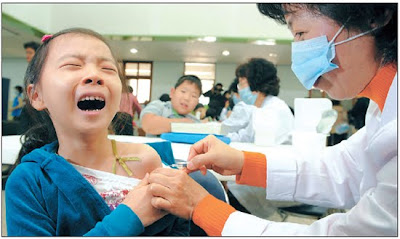 [above: "Aaaagh! It hurts! This is clearly the result of a paranoid overreaction to a virus that has proven far weaker than experts had claimed, but which the government continues to raise alarm about in order to justify its own embarrassing overkill to stamp out a phantom pandemic that has killed only a few dozen people so far, most of them sick with something else anyway," says first-grader Park Sujin of Tobong-ku Ward.]