Nana of the North

Reuters (via WaPo) has an interesting article on Ri Chun-hee [리춘희/李春姫], the sexagenarian talking head who sings the praises of the Dear Leader on the North Korean telly:


Ri is the forceful grandmother speaking with the authority of the state as the main newscaster for North Korea's only TV channel. Her face is one of the few broadcast abroad and her stentorian reports thunder across airwaves from the land where leader Kim rarely speaks. 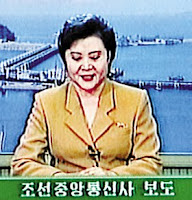 Ri, born in 1943, is an actress turned newscaster who first took to the air in 1971 when the North's state TV channel was taking off.

Slightly plump, with permed black hair, she has become an institution whose bombastic delivery decries the miseries inflicted upon the state by a hostile world while celebrating its military triumphs.

"With her rusty voice that is powerful and appealing, what could the 65-year-old Ri have gone through to become the people's broadcaster and hardworking hero?," the North's Chosun Monthly magazine asked in an article last year.

Since the North's state media is in the habit of answering the questions it poses, the magazine tells of Ri's rise to fame, that of course was guided by state founder Kim Il-sung, who nurtured her "with warm love and faith."


In North Korea everything is attributed to either the Great Leader or the Dear Leader. That certainly would make standardized tests easy.