Why does the Bangkok-based syndicated cartoonist who shows up in the Korea Times have to take everything serious and treat it like it's a joke?

I'm not talking about slaying others' sacred cows, which one could argue is the job of cartoonists (assuming there's a point to it). Rather, I mean, in reference to the cartoon below, I imagine that the cartoonist thinks that violence against women is bad, but he seems to be making a big joke out of it. Really, what's wrong with you? It's something I would expect from the Middleboro Junior High School Weekly Guardian. 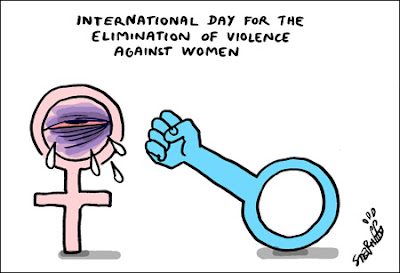