Korea news links for November 11, 2009: Code Red in the Yellow Sea (Or, Commotion in the Ocean)

What is it with South Korea's neighbors trying to take down its ships? First the Japanese Navy Water Surface-Floating Self-Defense Collection of Boats™ rams a South Korean freighter, and then yesterday a North Korean boat tried to take down a ROK Navy vessel after it provocatively crossed the NLL (insert your own joke about what a DPRK boat provocatively crossing the NLL would look like). Seoul has to be thinking, "Why are these guys gunning for me? I've got to think!" 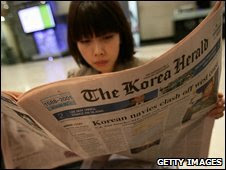 It's all serious business, at a time when Washington and Seoul are both trying to make nice with Pyongyang. It's so serious, that Getty Images went to the trouble of getting a visual for this very news story. As is typical of much of the Western press, this basically boils down to showing someone reading a newspaper that contains the story.
Lazy journalism at its finest: not only is she reading an English-language newspaper that was probably handed to her as a prop, she is not even reading the correct page for the story. She's probably checking her horoscope, Dear Abby, or the latest volley in the war between yellow journalists and E2 English teachers. 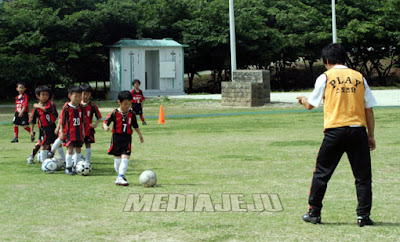