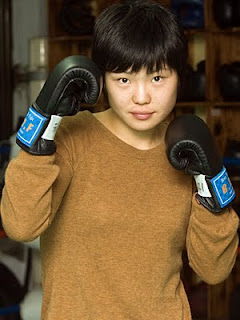 Reuters has a piece today on Choi Hyunmi [최현미], a defector from North Korea who is a WBA featherweight champion for women's boxing.

I've never been one for boxing, and women's boxing has no more appeal than the sausaged variety, but I've always found the sport interesting from the perspective of how South Koreans rode it to some level of international fame back when Miracle on the Han was still in its not-yet-miraculous stages. Apparently some see in the nineteen-year-old Ms Choi a chance to bring back those heady days:


Possessing the power and speed to overwhelm an opponent and a ruthless streak in the ring, Choi is known as the "Defector Boxer Girl" in South Korea, where she is a new hope for a declining sport in the country that was known for producing scrappy and fearless fighters who steadily climbed the world rankings.

"I don't mind that nickname, but I want to be known for my boxing more than the fact that I defected from North Korea."

With a compelling story that includes a high-risk escape from North Korea, Choi's tough, girlish and endearing character has helped make her a budding media sensation in South Korea.

The 170 cms (5 ft, 7 inches) tall Choi grew up in what would qualify for an affluent family in impoverished North Korea. Being taller than her peers she was attracted to sports and dabbled in boxing.

"I bought her a wonderful accordion to keep her out of trouble but she gave it up for boxing," said her father Choi Young-choon, who used to work for a trading company in North Korea that exported minerals such as zinc and copper.

His business took him to China and it was during one of those trips that he defected. He bribed border guards to allow his wife, daughter and son to cross into China too and join him in the escape to the South, local media said.

The family made its way to Vietnam and came to the South in 2004 with more than 400 other defectors in what was the single largest group of North Koreans to arrive in the country.


We constantly hear stories of North Korean defectors having difficulties adapting to the hustle and bustle of South Korean life, and especially the prejudice many face, so it's nice to read about someone from the North who is being looked up to as a positive figure.