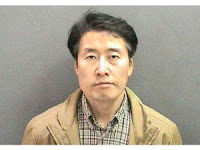 This a follow-up to this story from 2005 (which includes a 2007 update about an arrest warrant and a 2009 update about an extradition). It involves a drunk-driving-related accident perpetrated by a Hyundai America executive in Orange County whose stalled vehicle on the Newport Freeway (State 55) caused the death of a local college student and musician from the OC community of Fountain Valley, Ryan Dallas Cook.
After fleeing and then being extradited back to California, Youn Bum Lee pleaded guilty on Tuesday (California time) to a vehicular-manslaughter charge stemming from the alcohol-related hit-and-run crash.
After a soju binge at a company-sponsored dinner in the "Koreatown" of Garden Grove, a very inebriated Mr Lee (left) got in his car and drove home:

The group drank 14 bottles of soju, a distilled Korean rice wine, before moving on to a nearby karaoke bar where Lee consumed more alcoholic drinks before getting in his company-issued Hyundai sport utility vehicle at about 12:05 a.m., prosecutors said

Lee drove under the influence of alcohol, with his headlights off, along the 22 freeway onto the southbound 55, where he veered into the carpool lane and crashed into the center median, prosecutors said. Lee's SUV rolled backward and came to a stop south of Dyer Road in Santa Ana. Cook, who was riding his motorcycle in the carpool lane on his way home, was unable to stop in time to avoid crashing into Lee's black, unlit vehicle, prosecutors said.

Cook, a Golden West College student who was a trombonist with the ska-rock band Suburban Legends, was thrown onto the freeway, where he was run over by several other vehicles. He was later pronounced dead at the scene.

The next morning, Hyundai employees helped Lee make his escape:

Later that morning, Lee went to work at Hyundai Motor America's offices in Fountain Valley. A few minutes after arriving, he returned to his vehicle to back it into a parking space in an effort to hide evidence from the crash, including a shattered back windshield and blood, hair and other human tissue, prosecutors said. Lee later consulted with the general counsel of Hyundai Motor America before he was driven by a colleague and a supervisor to Los Angeles International Airport that afternoon. At 12:30 a.m. on Oct. 20, 2005, Lee boarded a Korean Air flight to Seoul, South Korea, leaving his wife and young child behind, prosecutors said.

To its credit, it appears Hyundai America helped make the case against its own:

The District Attorney's Office credited Hyundai Motor America with helping to persuade Ryu, the witness, to return from South Korea to provide testimony in July. Ryu's testimony was critical to establishing that Lee was intoxicated at the time of the crash, Price said.

I'm particular harsh when it comes to drunk driving. If people really feel compelled to drink, they have to make arrangements ahead of time to ensure their own safety and that of others. My heart goes out to Ryan Dallas Cook and his family, but at least now they're getting some justice, not that that will bring back their loved one.
UPDATE:
Some of the OCR commentariat sure are spreading the love. Amidst wholly gratuitous attacks at "illegal alien mexican'ts" we have comments like this:

By the way, visiting managers from China, Japan, and Korea- ALL need to be deported. They come here, abuse our laws and disrespect our cultural beliefs as Americans. Many of which will never bother to learn English, and depend on translators to convey their biased Asian opinions. Stop passing them the free U.S. rice bowl, and start sending them back home!

Not sure what this had to do with not being able to speak English or any of these other things. And given that this was one South Korean company, why should all Koreans be bashed for this, much less Japanese and Chinese? Here's my comment, by the way. I had started to write "나쁜 놈," but I was afraid that when someone figured out what I'd written, my comment would be taken down. After all, it had blocked me from calling the guy a "jerk."
on November 11, 2009