Meanwhile, over at Consumer Reports...

There is a discussion going on over at The Marmot's Hole about whether American cars deserve their sucky-ass reputation. Seouldout gives some impressive stats that I tried to wade through, but I couldn't find the details. Specifically, where do South Korea's top sellers rank in JD Powers or Motor Trend?

South Koreans bought South Korean-made cars for two reasons (though the two reasons were not always present in each person): they were cheaper and they were Korean. Nowadays, South Koreans who can afford more expensive cars might still choose South Korean cars because they're not just better than before, but because they're now supposedly among the best. Why spend as much or more on a Honda or Toyota when you can buy a Hyundai Sonata that will not just be about as good but also a lot easier and cheaper to fix? Same with a Ford or a Chrysler.

At any rate, Consumer Reports, which I used to buy my Acura back in college, is still the most comprehensive approach to getting a reliable, affordable, and safe vehicle. This is what they have to say about the topic:

The major Japanese brands and South Korea's Hyundai and Kia make plenty of reliable vehicles. Of the 48 models with top reliability scores, 36 were Asian. Toyota accounted for 18; Honda, eight; Nissan, four; and Hyundai/Kia and Subaru, three each.

On the whole, Japanese vehicles are consistently good. All Hondas and Acuras were average or above. Toyota, with its Lexus and Scion brands providing a broader product range, had just one vehicle that was below average in reliability, the Lexus GS AWD.

The Nissan and its Infiniti luxury division have been mostly very good despite lapses such as the subpar Nissan Quest minivan. The once problematic Infiniti QX56 and Nissan Armada SUVs are now average, and the same goes for the 4WD Nissan Titan pickup, although its RWD version is still troublesome. Over the last two surveys, the Nissan Versa hatchback has been average while the sedan has been far below average-an oddity.

Subaru has been a very reliable brand, but this year the turbocharged Impreza WRX turned up with a worse-than-average reliability score even though other versions of the Impreza have been average or better, as were all other Subarus.

Hyundai and Kia continue to make reliable cars. The Hyundai Elantra and Tucson, and the Kia Sportage got top marks. The new Genesis sedan was better than average with the V6, average with the V8. The only models that scored below average were the Kia Sedona minivan and Sorento SUV.


I have nothing against American cars. The first car I ever rode in was a Chrysler, and I learned how to drive with that very same vehicle fifteen and a half years later. I drove that same car to college a couple years after that, and I was twenty when my dad called me and asked if I didn't mind him finally selling that car — which was still running just fine! — which everyone in our family felt had sentimental value. By contrast, my mom's more recent Chrysler, a minivan, has been crap. Two of my siblings also bought Chrysler minivans, and they all seemed to fall apart — in dangerous ways — at the same time. 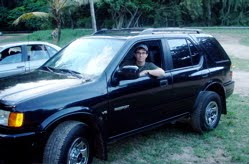 But I'm sensitive to quality changes. I'd heard good things about Buick, which I think could make a serious dent in the Korean marketplace with the right marketing. (Use Cadillac and Buick to tag-team the market: Market Cadillac as a high-quality, upscale vehicle, while offering Buick as a poor man's Caddy.) When I came to Hawaii, my first time living in the US since returning to South Korea after graduating from college, I took a baby-step toward buying an American vehicle: a used Honda manufactured at an Isuzu plant in Indiana. To be honest, this Honda Passport SUV didn't have the greatest of ratings, but it is reliable and it is a good fit for Oahu's crappy roads. That's my nod toward buying American for now.

Anyway, I'd like to see American cars do well in Korea, just like I'm thrilled to see Korean cars doing better and better in the US. But American carmakers have to stop blaming the Korean government for their failures. If they cannot keep up with the Japanese and Germans in South Korea, then there's something wrong with the way they're doing business.

Whining about South Korea's protectionist practices of a decade and a half ago (e.g., audits of foreign car buyers, which was justified by the presumption that people who could afford vehicles with these huge tariffs were those who had gotten money through corrupt means and/or were hiding sources of income) or pre-GATT tariffs that nearly doubled the cost of a car, are just showing not only how out of touch they are with what's really going on in the ROK, but also how they're trying to distort reality so they can make a better case in Washington.

If you need some ideas, email me. Let's talk.