Click the screen grab below for a larger and clearer read, but come back for the explanation. 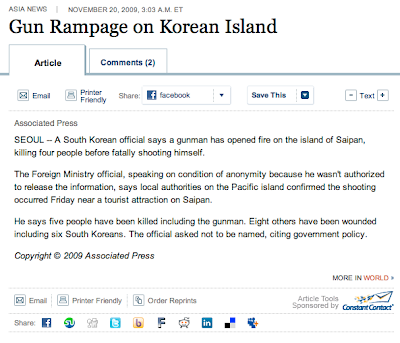 Yep, it's right there in the Wall Street Journal: "Gun Rampage on Korean Island." Expect a Tokto-like conflict on the Interweb to last well into the next century.

Seriously, though, you'd think that the people at the Wall Street frickin' Journal would know their geography a bit better. Reminds me of the time I was helping a colleague get into dental school in the US after a planned bachelor's degree in biology from the University of Guam. "Nope," one dean told us by email, "We only accept baccalaureates from American schools." He was a tad embarrassed when we told him later that, indeed, Guam is a part of the United States and U of G is an accredited American university.

UPDATE:
Oh, it looks like some other people noticed this as well, and added some sentiments similar to mine (note also that commenter Mallory Watkins's default silhouette is the head of a man): 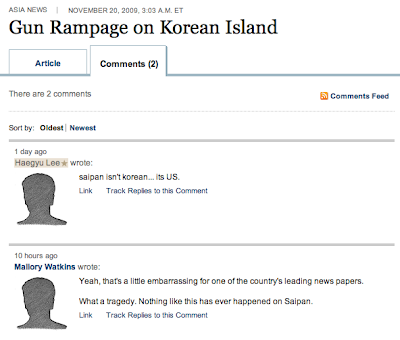 Having tracked the news about this story pretty thoroughly that day, including the AP stories that appeared on various sites, I'm pretty sure this was the WSJ's headline and not AP's, even if the body of the article is AP's.

This may have been a partial screw-up on the part of the AP reporter as well, I guess. Often with such articles about far-flung parts of the US, like Samoa or Guam or Saipan, the reporters will subtly refer to it as a "US island" or "American territory," but they didn't here. Perhaps the writer was confused as to why the South Korean Foreign Ministry was issuing a press release on it, and so he/she assumed that Saipan was, indeed, a Korean island.

To be fair, though, from 1922 to 1945, Saipan and Korea were officially both part of the same country.

When criticizing Korean over-reaction to Japanese claims on Tokto, some Americans I've talked with emphatically point out that "in America we'd never get so upset about something like this." True and unsurprising, given that, case in point, the US has so many islands we can't even be bothered to keep track of them all.