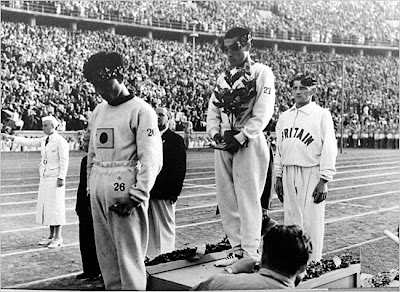 The New York Times has an interesting piece focusing on skating darling Kim Yuna's Olympic prospects in Vancouver and how her success there — she's a favorite for a gold medal in figure skating — may put her on par with South Korea's reigning Olympic hero, Sohn Kee-chung [손기정/孫基禎, son kijŏng]:

At the Vancouver Games in February, she is heavily favored to win an Olympic gold medal in figure skating, something no Korean woman has done. A victory would make Kim perhaps the most visible Korean Olympic champion since the bittersweet success of Sohn Kee-chung in the marathon at the 1936 Olympic marathon in Berlin.

Those were the Games of Hitler and Jesse Owens and of a Korean peninsula occupied by Japan. In becoming the first Korean to win a gold medal, Sohn set an Olympic record of 2 hours 29 minutes 19.2 seconds. But he was forced to compete for Japan, to adopt the Japanese name Kitei Son and to stand on the medal podium while the Japanese flag was raised and the Japanese anthem was played.

Later, Sohn became a heroic symbol of nationalism and patriotism in South Korea. When it competed for the first time as an independent nation at the 1948 Summer Olympics in London, Sohn carried the South Korean flag in the opening ceremony. He is buried in the National Cemetery in Daejeon, and his story is taught to children in history classes.

“I know of him,” Kim, the reigning world champion, said of Sohn on Friday after training here at Skate America, a pre-Olympic competition. “I don’t know of all the details. I know he did a very good job in the Olympics even though Korea was occupied. I will try to be like him.”

I guess it shows how much of a shell Miss Kim finds herself in as she practices, practices, practices, that she is so relatively unaware of Mr Sohn.
Anyway, I like heroes like Yuna just because I think it's great when people see that hard work and dedication are what gets you ahead, not cheating and cutting corners. Good luck, Yuna.
on November 15, 2009