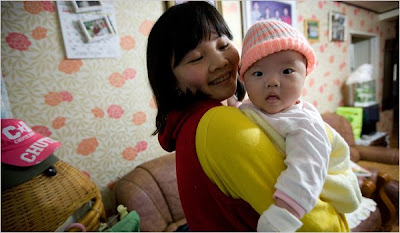 I should first explain that it's the baby boom that's miniature, not the babies. Normal sized babies, these be.

Anyway, it's the latest report of the one of the newer memes about Korea. An excerpt:


Just a few years ago, the number of pregnant women in this city had declined so much that the sparsely equipped two-room maternity ward at Yeonggwang General Hospital was close to shutting down. But these days it is busy again.

More surprising than the fact of this miniature baby-boom is its composition: children of mixed ethnic backgrounds, the offspring of Korean fathers and mothers from China, Vietnam and other parts of Asia. These families have suddenly become so numerous that the nurses say they have had to learn how to say “push” in four languages.

It is a similar story across South Korea, where hundreds of thousands of foreign women have been immigrating in recent years, often in marriages arranged by brokers. They have been making up for a shortage of eligible Korean women, particularly in underdeveloped rural areas like this one in the nation’s southwest.

Now, these unions are bearing large numbers of mixed children, confronting this proudly homogeneous nation with the difficult challenge of smoothly absorbing them.

South Korea is generally more open to ethnic diversity than other Asian nations with relatively small minority populations, like neighboring Japan. Nevertheless, it is far from welcoming to these children, who are widely known here pejoratively as Kosians, a compound of Korean and Asian.


I'd like to see a little more evidence that Kosian is typically used pejoratively or that it's even commonly used (the "English" term, that is) among native Korean speakers. Frankly, I'm not sure what the Korean equivalent would be, and right now the people I would ask are all asleep or hungover.