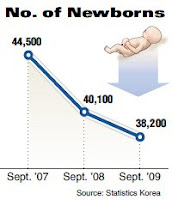 Too many drugs, not enough babies. Babies are hard to make; they require considerable infrastructure and from planning stages to delivery they take at least nine months. With a nineteen-month decline, it won't be until the latter half of next year before we see a turn around in the baby manufacturing sector, if then.

Perhaps "No of Newborns" is being misunderstood as a campaign against having babies. Did anyone think of that?!

Meanwhile, the state-sponsored Korea-Africa Forum is drawing to a close, with Seoul making some rather lofty promises to African nations that were represented. Like the failed Madagascar deal, this seems to represent a strong effort to engage governments there in order to secure some of the food, mineral, and energy resources of that continent. Students from Africa with whom I've talked generally have a favorable attitude toward Korea — thus far, at least — especially when compared to the Chinese, who are also making inroads. Let's just hope that South Koreans dealing with Africa can remember that the ROK was also once a starving basket case that needed sincere help, not opportunistic backstabbers. Let's hope. 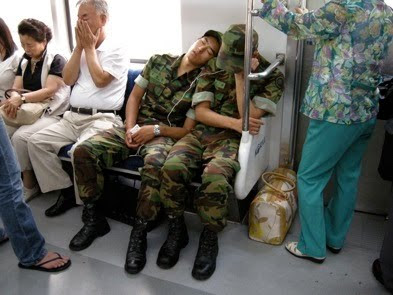