This may be of interest to no one but me, but I wanted to give some kudos to Apple and FedEx. Sure, I'm not too happy that my two-month-old MacBook Pro is occasionally making sounds like that of a revving engine — after already having the hard drive replaced for a mysterious clicking sound — but I am thoroughly pleased at the quick turnaround time for my most recent Apple purchase, a blue iPod Shuffle to be used for jogging as the battery on the 3.5-year-old iPod Nano I have has begun to slowly die*.

So I bought the $59 device online. I'm only listening to news programs when I jog — NPR, NYT, PBS — so the 2GB "500 songs" version is fine. It's a really tiny device that clips on your clothes; there's a life-size photograph of it to the left of this paragraph.

Anyway, I chose to buy it online, since you can then get the free engraving. I sometimes lose things (my iPhone went missing for three weeks) and so I thought it prudent to have my email address and phone number on the tiny device.

I had been warned that I could receive the device as late as the 30th, so I was dismayed to see that instead of shipping things out to Honolulu directly (as the ROK post office does with things it ships to Hawaii), my packaged seemed to be taking the route of Magellan to get to the Sandwich Islands (that's us in Hawaii, by the way, just in case you work for the Wall Street Journal). First it was headed for Shanghai, then Anchorage, then Oakland. I was worried that if it kept up that trajectory, it would end up in Memphis, their hubbest of hubs, and then be sent on a special plane for all FedEx packages headed for Hawaii.

But no, they hung a right at the Bay Bridge and headed for the Aloha State. They pulled an all-nighter, apparently, getting my stuff to their Honolulu sorting facility (near the airport, I think) by 8:31. By 10:50 a.m., it was on the truck. FedEx delivery to our dorm is usually in the afternoon, and lo and behold, my package was signed for by the dorm office staff at 2:33 p.m.

I was hoping for a just-under 48-hour travel time for this to be a cool story, but it was 48 hours and 34 minutes. I'll still accept this as a neat situation deserving kudos. Globalization has its critics, but if it gets me my personalized iPod Shuffle in short order so I can hear news about those globalization critics while jogging through the green valleys up mauka-side Honolulu. Below is the FedEx site's updated list of my iPod Shuffle's travels. 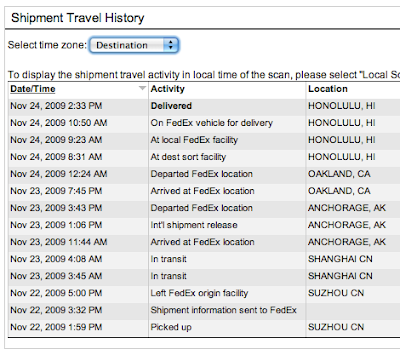 One of the criticisms of globalization, of course, is that producers of goods and services (especially large-scale producers) are so hooked on competing in the cut-throat global marketplace that they cut corners in order to bring out the end product. Let's call that Microsoft-ization, to go along with the much ballyhooed McDonaldization, where things are produced so uniformly so as to make them cheaper and cheaper to reproduce.

And I would hate for any cost-cutting measures to, say, the downing of a FedEx cargo plane over the Pacific, with my iPod Shuffle on board. That was, after all, the subject of the Robert Zemeckis documentary Cast Away, with Tom Hanks re-creating the role of the brave Chuck Noland (Why didn't they call it Chucked Away? Missed opportunity for a little light humor, I'd say).

Mind you, this wish is not a selfish one, for I'm confident that Apple and/or FedEx would have insured I somehow got another iPod Shuffle (maybe even two! Score!). Rather, it is for the sake of whatever Chuck would have survived the crash and ended up finding my iPod Shuffle. After hearing "Please connect to iTunes to add music" over and over and over again for the next four years, he surely would have gone madder than the Wilson ball would make him. And I'd really hate to inflict that on anyone.

Plus, the now crazed Chuck (newly rescued) would know my email address and my phone number.

* I wish to preserve the iPod Nano (and its battery) for swimming, since I went to the expense of getting an H2Audio underwater casing for it, and since the shapes on those danged things keeps changing, I would need to get a whole new casing! Them puppies ain't cheap.