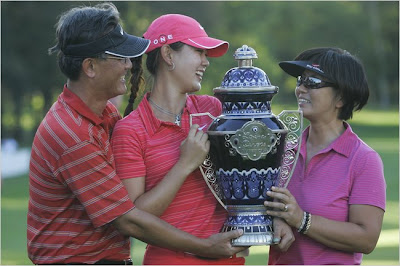 With all the attention that Michelle Wie has gotten over the past few years, it's hard to imagine she has never actually won an LPGA event. Until today.
The media darling, well-known even among those who don't follow golf, was an incredible golfer for her age when she was in middle school and high school. But as she entered adulthood, her mad skills had not translated into mad wins. Her first LPGA event was at the age of twelve and she's now twenty.
As daily updates of the Lorena Ochoa Invitational in Guadalajara, Mexico, appeared in the Korean press, Ms Wie's name didn't even show up. But she ended up with a thirteen-under-part score of 275.
If she's finally gotten her stride back and attained maturity, maybe we will see her turn into a Tiger Woods yet.
on November 16, 2009