I don't know if people back in South Korea can get a feel for how effectively the Palin publicity campaign has been rolling through American life these past few weeks, but even if firmly blue-state Hawaii — birthplace of our president — it's not hard to see signs of Sarah everywhere (and by everywhere, I mean online, in bookstores, on TV, etc.). 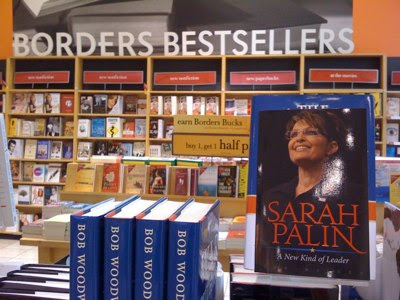 In that vein, Matthew Dowd of the Washington Post has an article on what could happen in 2012 to bring about a Sarah Palin inauguration on January 20, 2013:

Second, America is still (unfortunately) politically divided and polarized, and Palin benefits from this dynamic. While Democrats love Obama, Republicans look on him with real disfavor. The gap between Obama's approval rating among Democrats and among Republicans is nearly 70 percentage points -- a higher partisan divide than either Bill Clinton or George W. Bush experienced. Obama's agenda and actions this year, and some mistakes, have solidified this divide.

Polls show that Palin's favorability numbers are a mirror image of those of Obama. She is respected and loved by the Republican base, while Democrats despise her. Granted, independent voters have significant reservations about her capability to be president, and this would be a hurdle in the general election. But to win the Republican nomination, Palin needs only to get enough support from the base to win early key states. Already, in nearly every poll today, she has a level of support that makes her a viable primary candidate. Just look at the crowds and the buzz her book tour is drawing.


He then goes on to inform former Governor Palin what she could do to enhance her candidacy. Not her ability to govern, mind you, but her stature so that she can be elected. (I, too, have offered Governor Palin advice — as if she would actually listen to me — but it was of a more substantive kind.)

Frankly, I'd prefer to think about who might be the next president in South Korea, which also has a presidential election in 2012. President Lee is barred from re-election, so it might open the way for Park Geunhye to finally get her party's political faction's nod. That's a far less depressing thought to me than a Palin presidency, since the former beauty queen has shown herself to be about flash over substance and she doesn't really seem to have an intellectual grasp on very important issues.

Obama is, to me, doing a fine job, though not perfect. I think once the health care debate is over and all the anxiety-causing question marks are removed, people will look more clearly at the result and Obama's ratings will go up. Assuming we don't all die of swine flu before then.