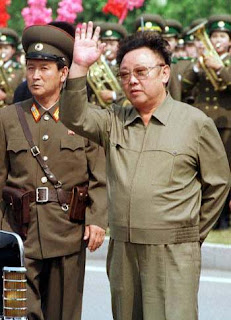 [right: Aim for the hand. I've studied hundreds of pictures of Kim Jong-il in public, and I'm certain he's powerless without his waving hand.]
Piggybacking on a story a few days ago about Kim Jong-il's entourage of trains, UPI is reporting that his handlers have stepped up security on fears that someone might be trying to kill the Dear Leader:

North Korea has intensified the personal security of Kim Jong Il in an apparent bid to prevent a possible attack when he travels around the country as public discontent is mounting following tougher social crackdowns.

The article lays out a case that the 2004 explosion at Ryongchŏn (see train link above) may very well have been an assassination attempt. It then goes on to regurgitate the stuff on the trains and the special stations less than twenty miles from his various villas before it gets back into the stuff about fears of unrest:

Tighter security on Kim's trips comes as he is making brisk public activities this year in an apparent bid to quell rumors about his health. He is widely thought to have suffered a stroke in August last year.

Kim made 129 "on-spot" guidance tours this year, matching the total from 2005, when the previous high was set, and will probably exceed that record by the end of the year. In his latest reported inspection tour, state media said on Sunday that he traveled to the military's unit No. 1224 and urged the troops to improve their combat capabilities.

State media usually don't disclose details of Kim's public activities to ensure his safety, though "on-spot" guidance tours are at the center of the reclusive leader's ruling formula.

Sources in Seoul say the Kim Jong Il regime is concerned about mounting public discontent after it recently imposed tougher crackdowns on street markets it had tolerated for years. The ban on market activities was depriving families of a vital source of food and income at a time of growing food shortages.

The North has also take a series of measures to block an influx of outside information for fear it could damage the decades-long cult worship that has played a key role in keeping the troubled country afloat despite the global collapse of communism.

The North has also staged mass campaigns, mobilizing its famine-hit citizens for public works to tighten social control, as many North Koreans are drifting through the countryside in search of food or engaged in market trading.

"North Koreans no longer entirely depend on state food rationing, which has been irregular. They get all of their food and basic necessities from markets," a North Korean defector said.

Lee Seung-yong, director of Good Friends, a research and aid group in Seoul with extensive contacts in the North, said the crackdowns on markets have sparked widespread discontent among North Koreans.

Not a few North Korea watchers said the public outcry could lead to revolt in the country. The New York-based Council on Foreign Relations, in a report this year called Preparing for Sudden Change in North Korea, said a military coup was possible.

"Unconfirmed reports of past assassination attempts and military purges, not to mention the apparent precautions Kim takes to ensure his personal security when traveling around the country, all suggest that a military-led coup is quite plausible," the report said.

I'm all for a coup, but healthy skepticism of what defector's tell us is a good idea (there's always the risk that they might unconsciously be telling their new handlers what they think they want to hear, they themselves might be outliers who are not describing the norm, or their own intense hatred of the Pyongyang regime may cloud their narrative).
Nevertheless, if we can glean from those escaping North Korea something of an emerging picture of discontent and outright fear of this discontent by DPRK authorities, how should we proceed with this information? Is flooding the North with radios effective? How about South Korean pop culture goods? Maybe do-it-yourself guides on local governance.
on November 11, 2009