What's in store for the Obama-Lee summit in Seoul? 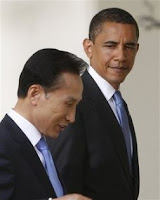 With US President Barack Hussein Obama arriving in Seoul on Thursday for a summit with ROK President Lee Myungbak, the press is naturally shifting its focus from Obama's visits to Japan and China toward the upcoming visit to South Korea.
There seems to be a confluence of changed attitudes inside and about South Korea such that things feel a little different. Unlike the Roh-Bush era, when the two very divergent political figures tried hard to show that, yes, we really do get along, Hatoyama is the one who played the role of difficult ally (Google Okinawa+Obama+Hatoyama if you don't know what I'm talking about).
Instead, Lee is gung-ho about sending troops to Afghanistan, both sides are on the same page about North Korea, all is well with USFK, and the only real problem is the ROK-US free-trade agreement, which Lee seems hell-bent on seeing through, so he has to play nice.
In other words, a role reversal from the past decade: Seoul is now the good ally, and Japan has become the problem child (though I would submit that that may be an unfair characterization of Japan — more on that in another post).
Anyway, the point of this post is to highlight a small Q&A piece from Reuters about Obama's visit to the Land of the Morning Calm. It especially talks about what to expect from the summit in terms of North Korea and the FTA. An excerpt:

WHAT IS THE PROBLEM WITH THE AUTOMOBILE TRADE?

The deal with the United States is supposed roll back tariffs and end a tax on engine displacement that U.S. automakers have said hurt sales of their products.

U.S. officials have complained about numerous non-tariff barriers to trade in the sector not addressed in the deal.

Foreign cars make up about 6 percent of the vehicles on the road in South Korea. Analysts have said even if all barriers are removed, U.S. cars will not make significant gains in the market where imports from Germany and Japan have been making steady gains and locals have shown little appetite for U.S. offerings.

I need to write a post on the FTA. I'd really like to hear from those opposed to the FTA why they are opposed. Saying that "South Korea has been an unfair trading partner for years" is a very dumb reason, methinks, to oppose an FTA that would dismantle the rules and regulations that allowed for closed markets all those years.
on November 17, 2009