Happy Monday, everybody out there who is not in Oahu, where it is Sunday and sunny with a chance of fish tacos. APEC is, unsurprisingly, still in the news, but Lee has already headed back to South Korea where he will no doubt prepare for his summit with US President Obama in a few days.
The fire in Pusan continues to make news, with several government ministers, including the PM, giving expressions of condolences. Tragic events such as this sometimes become catalysts for better enforcement, so if it turns out fire codes were violated, expect something to change, at least for a while.
Meanwhile, Kim Yuna has wowed the skating world yet again, and she is quickly moving from being a Korean celebrity to a global star.
One ominous bit of news comes in story #4, giving an indication of what North Korea might try to pull next in its efforts to turn the disputed maritime border into a high-profile source of conflict.

[above: President Lee was ineligible to pick up the Most Likely To Be Re-Elected award and had no hope of wining Farthest Traveled, but he did manage a Best Knock-Knock Joke Teller honorable mention.] 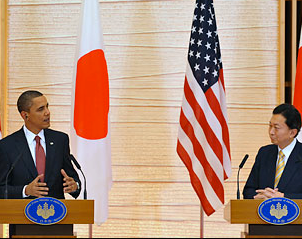