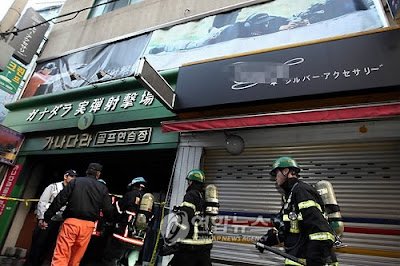 In Pusan [부산/釜山, aka Busan], Yonhap is reporting that at least ten people, including seven Japanese visitors and their Korean guide, were killed when a fire raced through the building they were in (Reuters story here). Both Yonhap and Reuters are calling the venue an "indoor shooting range," but the sign on the front says 골프연습장, which might be one of those computerized golf rooms.
On the other hand, an actual shooting range could be above or below that (such things are popular with Japanese tourists here in Hawaii).
I don't want to jump to conclusions, but we've all experienced closed-in and cramped businesses with inadequate or blocked fire exits. Tragedies like this just waiting to happen.
on November 14, 2009