The Orange County Register is reporting that eight people died of "swine flu" last week, bringing the total number of H1N1-related fatalities to thirty-four. In South Korea, with fifteen times the population of OC, the number stands at forty-eight. The dead included a pregnant woman, the third pregnant woman to die; four children have also died. 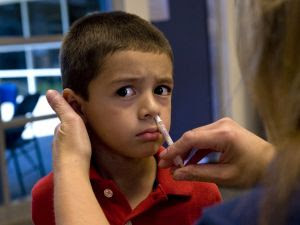 Meanwhile, authorities are desperately trying to get vaccinations out to as many people as possible. With H1N1 more virulent than typical seasonal flu, and with every new infection providing a chance for this unusual strain to mutate into something far deadlier, there is a push to get as many people protected as possible.
The goal had been to prevent new infections as much as possible before the vaccine was ready, and now that it is, the goal is to get it out there to as many people as possible as quickly as possible, starting with the most vulnerable.
Ironically, high anticipated demand for H1N1 vaccination has meant that supply will not meet demand even for seasonal flu vaccination, which has spiked in part because of increased awareness, though there's still some time before seasonal flu season begins. (Those who will tell you that "regular flu" has killed more people in the same period of time probably don't know what they're talking about, since the thirty thousand or so deaths attributed to seasonal flu each year are not uniformly spread throughout the year. In fact, the 2009-10 seasonal flu pattern has yet to emerge, but we're seeing a lot of off-season deaths due to H1N1, despite strenuous efforts to control it, which is troubling.)
Hopefully we can end up moving toward a best-case scenario (at this point) where vaccinations stop H1N1 in its tracks and the stricter controls and increased public awareness has a spillover effect on seasonal flu as well. Frankly, it's appalling that we allow thirty thousand people to die each year from something that is largely preventable.