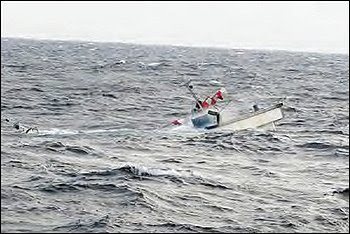 [above: The stern of the South Korean fishing boat is seen just above the surface.]
At least four people are dead and three others are missing in waters about halfway between Cheju Island and Japan's Fukue Island, after a Hong Kong cargo ship, the 3843-ton Joshu Maru, collided with their fishing boat, the 29-ton 3-Dae-Kyong. [UPDATE: AP is reporting that all four confirmed dead are South Koreans.]
The fishing boat flipped over, tossing the crew of seven South Koreans and two Indonesians into the water. Two Koreans were immediately rescued by the crew of the cargo ship, four bodies have been recovered, and three people are missing. Japanese and South Korean vessels and aircraft are still searching for the missing.