Ajŏshis around the world (installment 1): LAX

I've decided to start a new segment I'm calling "Ajŏshis around the world," where I will highlight ajŏshi-like behavior, even if it is not from Korean ajŏshis or even from people of ajŏshi age.

Today's installment comes to us from Los Angeles. More precisely, Los Angeles International Airport, where two men crossed a six-foot-high perimeter fence which would have given them access to all kinds of expensive stuff:

But police then determined that the men, who were carrying a guitar, cameras and a flask of alcohol, posed no safety threat. The men, whose identities were not released, were cited for trespassing and released at about 6 p.m.

Although these two men were reported to be in their twenties (at least a decade below the widely accepted ajŏshi eligibility cutoff), they get major ajŏshi points for doing something highly stupid (and potentially risky to their lives) while carrying around alcohol — on their persons and possibly inside their persons. And while typical ajŏshis don't carry around guitars, their behavior suggests they were going to start drunken singing at some point, so that's one more point. 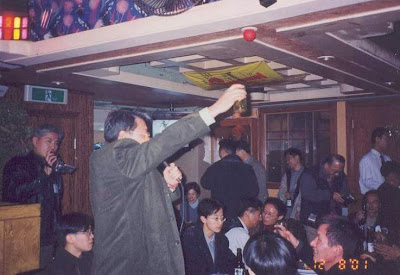 And while we're at it, let's give an Honorary Ajŏshi Award to LAX security (heh heh... lax security) for letting these people go after pulling a significant security-breeching stunt. What do you have to do in this town to get arrested (if you're not Black or Hispanic)?