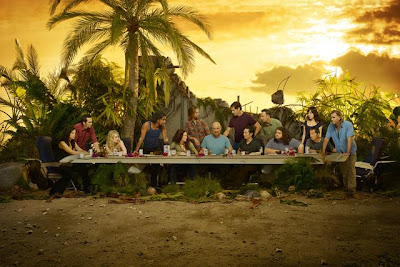 This is what I get for not reading the local papers more diligently. Apparently there was a huge sneak preview of the season premiere for what is being billed as the final season of the cult hit TV program, ABC's "Lost" (NBC's also lost, but that's an entirely different meaning).

Um, anyway, it took me a whole year after arriving in Hawaii to get caught up with the show — it's definitely not something you want to see out of order and there was no way in Korea to watch them in order — but ABC was (and still is) good enough to have all five of the previous seasons' shows available on line if you happen to live in the United States. I had seen the first two episodes of the show on a visit to Orange County several years ago, but I knew I should stop watching until I could watch them the way they were broadcast; the character development would be ruined and the story lines would make even less sense than they would anyway.

Though not my all-time absolute favorite television show — that would be "The Simpsons" or "M*A*S*H" (as long as you don't count the last seasons of the former and the first seasons of the latter) — "Lost" definitely ranks in the top ten, and it's a fun show to check out if you live in Hawaii, particularly when it comes to guessing (or knowing) where such-and-such allegedly non-Hawaii location was filmed here in Oahu. So it's too bad for me that I wasn't one of the twelve thousand who made it down to Waikiki for the preview. I'll just have to hope for a mysteriously appearing season 7.

UPDATE:
After thinking about this a bit, I wonder if the above photo is simply a play on words (depicting the "Last Supper" at the beginning of the last season), or is this a bit of foreshadowing by the producers, where John Locke will prove to have some messianic or Christ-like role. And which one of them would be Judas? And which one Peter? I know my Bible, but not my Michelangelo.

Email ThisBlogThis!Share to TwitterShare to FacebookShare to Pinterest
Labels: Lost