Oh, is that tomorrow?

Inspired by Ask A Korean, I've written the following post. First, his suggestion:


Do you want to spread football to other countries? Then bring a goddamn franchise to Los Angeles.

To which I respond, in my typical segue-prone manner...

After the NFL left Orange County (the Rams) and Los Angeles (the Raiders), there has been little point in watching professional football. Sure, we have the Chargers in neighboring San Diego County, but they're all the way down there.

Simply put, for me the Superbowl is only exciting in that clever new television commercials will be available, and Golden Palace dim sum restaurant will be a little less crowded. I literally had to look it up on Wikipedia to verify that the Superbowl is in fact tomorrow. [Just for sh¡ts and g¡ggles, I tried to alter the Superbowl 2010 entry to say that the game had been postponed until the 14th due to heavy rains in Southern California — I'm not making that part up — but you have to sign in to make edits, and ever since Google's problems in China, Wikipedia has hired some real mean thugs to enforce their rules.]

I must admit that I've gotten into college football since coming to Hawaii. The University of Hawaii has a pretty decent team, the Warriors (the only undefeated team in the regular season back in 2007), and since it's the closest thing the good people of the Aloha State have to a pro ball team, everybody follows them. Game day at Aloha Stadium is packed with a bunch of people who themselves have no direct affiliation with UH except that their taxes help subsidize the place.

I myself went to a game, and explained how football works to two Japanese friends who had fun even though they'd never seen football in their life. Then we proceeded to get on the wrong freeway and ended up on the other side of the island, which is why I now own a GPS unit.

I never got into college football while at UCI because UCI has no football team. The running gag is the t-shirts that say "UCI football — undefeated since 1965." Why ruin that? 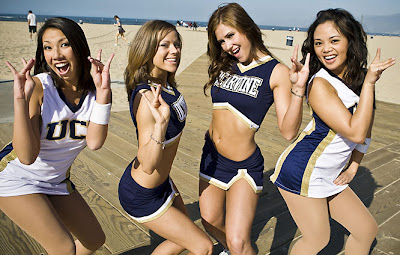 [above: Currently, we UCI students and alumni are able to enjoy the presence of these young women only at basketball games, where the Anteaters have a decent, but inconsistent team. We tend to beat UCLA and UNLV about, oh, half the time, which isn't bad. Zot!]

Anyway, I think The Korean makes a very good point about promoting "American football" (미식축구, mishik ch'ukku) in East Asia to plant the seed of interest in the sport. Folks like Hines Ward (and now Scott Fujita, I guess) can and will bring more and more attention to the sport in Korea and Japan, and a couple of really big Chinese guys could become the Yao Mings of professional football.

The quasi-NFL team here in Hawaii brings in talent from the Pacific Islands, particularly Samoa, and many of them go onto the NFL, which sparks even more interest. The same could work in Asia, much as Major League Baseball and FIFA soccer have done. 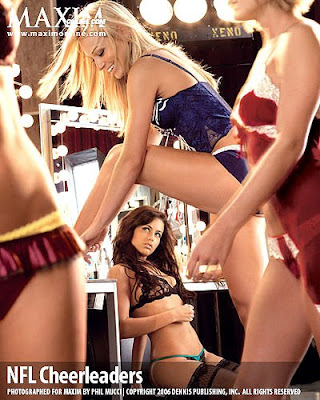 [above: I kid you not when I say that this was the top image available when I googled "미식축구." So who am I to argue?]