Korea and Japan are mulling a joint decision to employ daylight saving time as early as next year, but for now, the switch from DST to standard time is still an issue, vis-à-vis time differences with those parts of the world not in the Korea-Japan Time Zone (UTC+9). As of 2 a.m. on November 1, most of the United States moved their clocks back one hour (Hawaii being an exception). So, for example, California is now seven hours ahead of Seoul (but minus one day) instead of eight hours ahead (minus one day).
What that means for those of you currently in Korea (or Japan), is that your time difference calculation-impaired relatives back in the US of A will be calling you at 4 a.m. instead of 3 a.m. Please make a note of it.
Meanwhile, it looks like the early November weather in Seoul was a good day for a marathon (the Joongang Seoul marathon in story #1, not to be confused with the Seoul International Marathon in March) or, for the less athletic, Seoul's first annual walkathon. The former ended up at Olympic Stadium, while the latter ended up near the World Cup Stadium, on opposite ends of the city, lest there be some confusion and embarrassment and scandal. 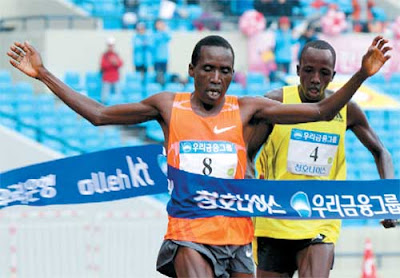