You call it corn, we call it "amazing you're still alive." 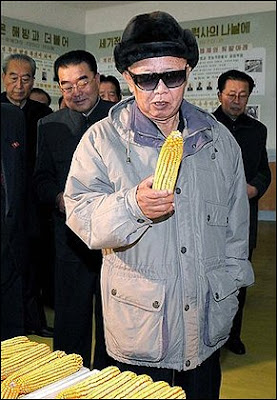 The Korea Central News Agency is determined to make us believe that the Dear Leader is not only not ailing, but that he's up and around and moving about. In other words, the sexy sexagenarian is alive, kicking, and virile.
And who am I to deny their efforts? In that spirit, I will post every single picture they release of the parka'ed one, but it will come with a cost: Kim Jong-il will have to suffer the indignity of being routinely turned into a caption contest. I'll start:
All right. It's late, I'm groggy, and that's all I've got. I was going to say something about microphones and testing one, two, three, but it's just stupid.
Oh, and in case you're treating this as some sort of "Where's Waldo?" adventure and you're trying to keep score, the KCNA says that this is a visit to a cooperative farm in South Hamgyŏng-do Province. It's not clear if he offered any on-the-spot guidance. But if he had, I'm sure the corn would have dutifully listened. They're all ears.
Did I mention I'm really, really groggy right now?
on November 09, 2009