Even the Western media has picked up news of the death of Lee Hurak [이후락/李厚洛], the former director of the Korea Central Intelligence Agency (KCIA), who in 1972 went to Pyongyang, North Korea, via the Truce Village at Panmunjom and Kaesŏng, and arranged a seven-point agreement between the two bitter rivals that included eventual reunification by peaceful means.
(Both sides had tried using military means for the same objective — the North Koreans in June 1950 and the South Koreans later that year as they were mopping up the mess the DPRK had made — but it didn't really work out for either one, since the UN/US and then the Chinese kept interfering with those plans.) 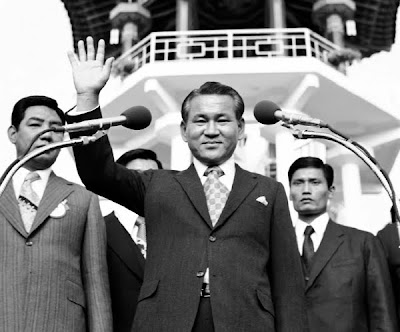 Here is what Time had to say that summer about the secret meeting:

Last week South and North Korea disclosed simultaneously that the two governments had signed a seven-point agreement whose ultimate goal was nothing less than reunification of the country after 27 years. Among its specific points: a promise to refrain from armed provocation and propaganda defamation of each other, an arrangement to conduct various exchanges of personnel and equipment, and an agreement to install a hot line between the two capitals. Said Hu Rak Lee: "We have entered a new era of dialogue."

The agreement had been foreshadowed by a recent series of preliminary talks between Red Cross representatives of the two countries to deal with the problem of reuniting families separated by the armistice line. In reality, both "Red Cross" delegations contained members with wide experience in foreign affairs and security matters. The progress of the Red Cross negotiations, which will formally begin later this year with a precise agenda, led to Lee's visit to Pyongyang, where he talked with Premier Kim II Sung and Kim's younger brother and heir apparent, Politburo Member Kim Yong Ju. When he arrived back in Panmunjom from his historic journey, Lee subsequently confessed, "I felt dizzy." Three weeks later Kim sent his second Vice Premier, Pak Sung Chul, to Seoul for secret talks with South Korean officials.

The seven-point agreement flabbergasted Koreans on both sides of the truce line, if only because of the depth of the enmity that has separated the two countries. The North Korean invasion of the South in 1950 led to a war that lasted three years and took an estimated 1,000,000 lives (including those of more than 50,000 Americans). As recently as three years ago, a 31-man suicide squad from the North had attempted to assassinate South Korea's President Chung Hee Park. 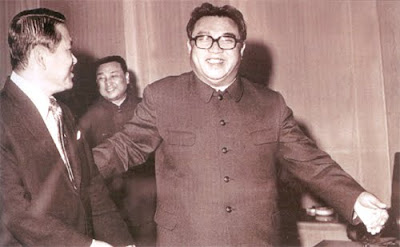 [above: Lee Hurak meets with North Korea's Great Big Leader Kim Ilsung]
What's particularly interesting about the contemporary Time article is the reasons each side had for trying to find accommodation. American disdain for then ROK President Park Chunghee's iron-fisted (though economically dynamic) rule while the Vietnam War was making overseas military engagement unpopular provided a looming threat that the US might pull its troops out of South Korea (something Jimmy Carter came very close to doing a few years later). That's old news, but I didn't realize that Kim Ilsung was worried about North Korea becoming a venue for tension between the USSR and rival communist power China:

But both governments have been afraid that a big-power directorate would once again settle their problems over their heads. North Korea's Kim II Sung has been concerned that his country might one day turn into a battlefield of a Sino-Soviet war. South Korean President Park, in the wake of President Nixon's trip to Peking, evidently decided that, instead of waiting for the withdrawal of the 43,000 U.S. troops still stationed on South Korean soil, it would be better to start talking with Pyongyang while the Americans are still there.

Looking back at all this thirty-seven years later, the notion that the Cold War was dissolving and ending anytime soon is, well, quaint:

Like Nixon's Peking visit, the Seoul-Pyongyang agreement represented a further dissolution of the legacy of the cold war. As a senior State Department official put it, "The significance of this event goes far beyond Korea. It's a message to all who will listen that if the superpowers can rearrange their relationships, then so can the smaller powers. There's plenty of room for accommodation around the world."

It would take another seventeen years for the Berlin Wall to crumble, and who knows how long before Panmunjom is turned into a museum and the DMZ into an official nature reserve. Thirty-seven years later we're still living on a divided peninsula. The death of Kim Ilsung, something I was sure back when I was a teenager would bring unification, is fifteen years in the past and we're still no closer. 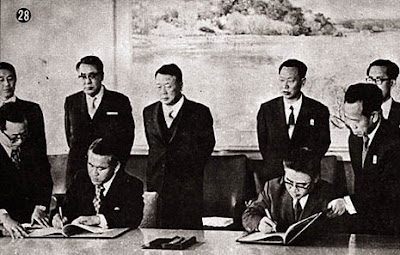 But at least the two sides are in agreement. I suppose the Pyongyang-Seoul agreements of 1972 affirm at least something useful for when the DPRK eventually collapses, implodes, or fizzles out: North Korea has reaffirmed that it sees its future in a Korean state made whole again, which would make it harder, politically speaking, for Beijing to occupy, absorb, or push North Korea into being an Inner Chaoxian buffer state or autonomous region.
Time has two more archived pieces mentioning Lee Hu-rak. In this one, Pyongyang is stated as objecting to Lee Hurak as the South's representative to reunification talks the following year. In this 1980 piece, highlighting the presidential candidacy of Kim Jongpil, a Chungchong region favorite son whose hobby was running for president, Lee Hurak is cited as an uber-corrupt official of the defunct Park regime:

The chief offender, according to the announcement: Kim Jong Pil, 54, head of the ruling Democratic Republican Party. Kim had amassed $36 million in "unmoral gams" during his years in power, it was claimed, by conniving to acquire some 5,300 acres of government land on which he eventually established lucrative tangerine groves and dairy farms. Runner-up in the corruption sweepstakes was Lee Hu Rak, once head of the Korean Central Intelligence Agency and Park's chief of staff. Lee, said his accusers, squeezed $4.6 million out of South Korean business firms, then used the capital to build up $32.3 million worth of jewelry and real estate.

And that was back when $1 million meant something. It's people like Lee who fuel the general disdain for the rich in South Korea, which has an egalitarian streak running through its national and social narratives that can't be bleached out. At heart, there is a sense that those who are rich got rich by illicit or unethical means, with few or no exceptions. Nowadays this perception may be changing, as anti-corruption measures have more teeth than before and more and more companies are seen as making money through innovation than shell games and back-room (or back-nine) deals.
on November 01, 2009