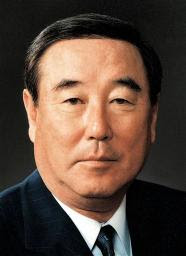 Park Young-oh [박영오], the seventy-two-year-old former head of the Doosan Group, one of South Korea's largest chaebŏl, was found dead today.
Authorities are ruling it a suicide but they haven't released the actual cause of death. Yonhap is saying the modest construction company he'd been running since 2008 has been in a slump since the economic crisis hit.
Park was ousted from his position as CEO of the family-run group in 2005. The following year he was convicted of embezzling company funds and creating illegal political funds, but he received a suspended sentence (does anybody actually go to jail in South Korea?).
The Associated Press makes note that this is "the latest in a string of high-profile South Koreans taking their own lives," adding that the country has the highest rate of suicide among OECD nations.
It's an old story. I myself have stated my concern that celebrity suicides, particularly among entertainers, contribute to making the ending of one's life seem normative.
on November 04, 2009