The Eggman (Or, coop d'état) 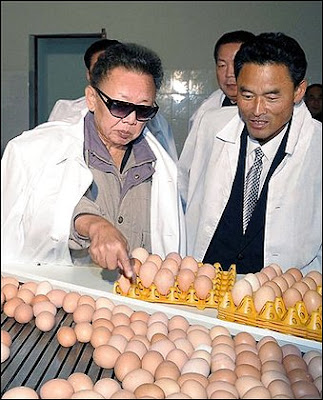 [above: You'll forgive the surprised look of the guy on the right, but it's been so long, that he forgot just what the hell these things are.]
In the latest maneuver of Pyongyang's Operation Prove the Dear Leader Is Alive and Kicking™, the Korea Central News Agency (KCNA) today released the above photo of Kim Jong-il visiting a chicken farm in North P'yŏng•an Province [평안북도].
KJI is said to have given on-the-spot guidance to the proud people's poultry about how to more quickly and efficiently produce eggs with stronger shells. All the fowl responded with a synchronous laying of perfectly oval-shaped eggs, which the Dear Leader dined on later that evening.
It's reported that when Grand Marshal Kim showed up at the farm for a completely unexpected inspection, the workers who were present also simultaneously dropped something, but it was not eggs.
Note: The truthiness of the first third of this article is guaranteed by the KCNA.
[Edit: Staff members at Monster Island, noting the pimpish way the Dear Leader and his entourage are wearing those white coats, had voted to entitle this post, "Dear Leader visits the Chicken Ranch," a play on words that may elicit a chuckle if you are aware that "Chicken Ranch" is also the name of a famous brothel (link NSFW, unless you work in an actual brothel). But we were overridden by Monster Island's own Dear Leader, who can be a real dictator sometimes. "Coop d'état"? Who would find that sh¡t funny?]
on November 03, 2009