Look out! He's got weaponized plutonium!

Why does the news keep repeating itself? I mean, geez, the starts then stops then starts again of the North Korean nuclear program, mixed with the denials, admissions, angry admissions, then denials again, are enough to confuse anybody.
Well, North Korea again talked up its nuclear capabilities, declaring on Tuesday that it had completed reprocessing its spent nuclear fuel for use in a bomb:

In early September, North Korea had told the United Nations Security Council that it was in the “final phase” of reprocessing 8,000 spent fuel rods unloaded from its nuclear reactor in Yongbyon, north of Pyongyang, and was “weaponizing” plutonium extracted from the rods.

If reprocessed with chemicals, the rods could yield enough plutonium for at least one nuclear bomb, according to officials and nuclear experts in Seoul and Washington. Using the same procedure at Yongbyon, North Korea was believed to have already accumulated enough plutonium for six to eight bombs.

On Monday, the North’s official news agency, K.C.N.A., said that the country completed reprocessing the 8,000 rods two months ago and had made “significant achievements” in turning the plutonium into an atomic bomb.

“We have no option but to strengthen our self-defense nuclear deterrent in the face of increasing nuclear threats and military provocations from hostile forces,” the news agency said.

The Guardian also has the story. So does Yonhap, Reuters, BBC, the Joongang Daily, and the Wall Street Journal. It's a big story. 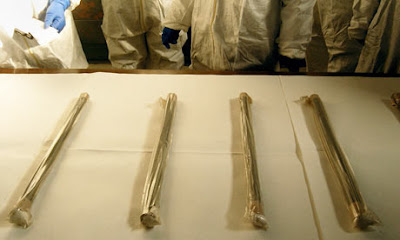 [above: The Dear Leader's personal shoppers look for shower curtain rods at Bed, Bath, and Beyond, where... Holy sh¡t! Those are unused fuel rods!]
Okay, then. If I were president of the US, I wouldn't be shaking in my boots. I'd coldly look the Dear Leader in the face and calmly say, "We think you're bluffing."
This is not the reaction that the Norks are looking for. They want panic. They want a West that is willing to give loads of concessions in exchange for a promise that North Korea will stop making weapons out of plutonium, uranium, aluminum, linoleum, mentolatum, or anything else they've got lying around.
"Yes, we do!" they will insist through the KCNA. "And we have been forced to make weapons out of plutonium because of hostile actions of the United States!"
From my White House, a terse statement: "We can no longer be held hostage to belligerent but false claims made by Pyongyang." In other words, we think you're bluffing.
"The United States is playing a dangerous game of cat-and-mouse," a KCNA report will say, edited by the British guy who works for them because he thought working for a rogue regime would be a cool thing to put on a C.V. "They will soon find out who is the cat and who is the mouse." Very cryptic, I like it. [Note to self: apply for that job, since the US presidency is probably out of reach.]
The US media will be criticizing me for taking such a dangerous gamble. If I'm a Republican, the New York Times and the Washington Post will write scathing op-ed pieces on how I am putting brinkmanship ahead of peaceful overture. If I'm a Democrat, Fox News and the Washington Times will do the same. If I'm an Independent, it would be a giant clusterfudge against my adminstration.
Nevertheless, I would stand my ground, in the face of KCNA reporter after KCNA report, each getting more and more spittle-flyingly angry at my insolence for not being the least bit concerned about these claims of plutonium-fueled weaponry.
Eventually, the North Koreans will have to prove that they have these nukes by detonating one of them. An old-abandoned mineshaft in a sufficiently low-seismic area (so that any tremor that occurs there can clearly be attributed to a nuclear device) would be a good place for such a weapons test.
As headlines from Tokyo to Roma spill ink over the escalated North Korean threat, my White House will issue another terse statement: "We believe that this supposed nuclear device was little more than a simulation using other, conventional, materials."
By now someone in Pyongyang would be bursting a blood vessel. After a few tense days or weeks of angry insistence that it was a nuke and that it's my fault for the test, followed by my White House's detached denial, the Norks will show me. They'll show me all right. They'll detonate another one. This one bigger and better than the previous one.
Lather. Rinse. Repeat.
If my plan works (and my plans usually do), within seven to eight months Pyongyang will have detonated — underground, where the fallout is unlikely to hurt anything but gophers — every single one of its nukes. Ha ha... depleted uranium, indeed.
And thus, any possibility of North Korea selling nukes to another rogue state or organization — or them getting lost when the regime falls — is evaporated along with them.
on November 04, 2009