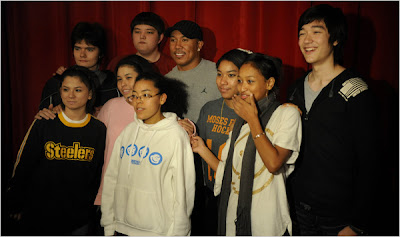 The New York Times has another piece focusing on the racial problems in South Korea, this one focusing on the difficulties and barriers faced by those who grow up biracial in the ROK. Well, I would amend that to biracial and poor. From the article:

Steelers receiver Hines Ward surrounded himself with old friends at the dinner table on a recent Saturday night. The bond was as obvious as the look on everyone’s faces — half Korean, half something else. The shared experience was far more than skin deep.

There was a boy who was bullied into depression and tried to commit suicide. There was a girl ordered by a teacher to keep her hair pulled back tight, to straighten the natural curls she inherited from her black father. There was another too intimidated by her taunting classmates to board the bus, choosing instead the humiliating and lonely walk to school. There were the boys who were beaten regularly and teased mercilessly. There were college-age girls who broke into tears when telling their stories of growing up biracial in South Korea.

But when they looked around the table, they saw familiarity. And a future.

The eight boys and girls, between 16 and 21, were visiting Ward from South Korea, where people of mixed races are considered everything from a curiosity to an abomination. What starts with teasing from childhood peers often turns to widespread ostracism and discrimination. It eventually leads to higher dropout, poverty and suicide rates.

The rise of Hines Ward in American football in 2006 put him on Korea radar. And that put biracial Koreans on Korean radar as well (though not for the first time).
To their credit, at least a few in South Korea noted that nobody would be talking about this half-Black and half-Korean dude unless he was an NFL star so maybe we should be paying more attention to those of a similar background in South Korea who aren't so lucky.
Hines Ward himself has been very savvy about this, and has been walking through this potential minefield quite adeptly:

“It’s a great culture,” said Ward, who was born in Seoul to a Korean mother and an African-American soldier father, and was raised mainly in Georgia by his mother. “I love everything about it. But there’s a dark side to that culture. And me, I’m just trying to shed a light on that dark side and make Korea a better place than it already is.”

The plight of biracial children in South Korea was largely ignored until 2006, when Ward was the most valuable player of Super Bowl XL. Koreans were quick to make the link to his Korean heritage.

That spring, Ward and his mother, Young He Ward, visited South Korea for the first time since Ward was a baby nearly 30 years earlier. They were mobbed by television cameras and gawking fans. They were honored by the South Korean president.

“I got more love there than I did in the States,” Ward said.

Ward was only starting to understand the underlying hypocrisy. Biracial children in South Korea recognized it instantly.

“They liked someone because he is famous,” So said. “If you are not famous, they are very cold. So I was happy, but also bitter.”

It represented, however, a slow turn toward tolerance.

I'm really not sure how "slow" this change is. In fact, like many other types of change in Korea, it has been seismic: change that was so little it was unrecognizable, followed by a dramatic shift due to a singular event. But the timing of that event works as Korean officialdom has been going through a pro-multiculturalism phase which has seen many of the legal barriers faced by biracial children and foreign residents dismantled.
That shouldn't be seen as the end of it, of course, and I would dare say that South Korea may require some affirmative action for a while to help some biracial Koreans get on their feet. But even if that doesn't happen, demographics marches on. There will always be those who
on November 10, 2009