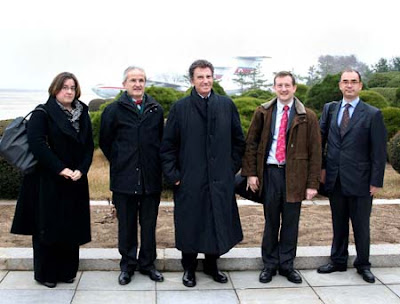 No, seriously, Jack Lang is in North Korea to discuss possible Pyongyang-Paris diplomatic relations and to provide another voice against nuclear proliferation (AP story here; Yonhap story here).
Monsieur Lang says he is there "to listen," which makes me a tad nervous. At best, the Sarkozy-sent diplomat and former culture minister may be able to play good cop to the US's bad cop in terms of getting Kim Jong-il to do something about those pesky nukes.
But at worst, this member of the French Socialist Party could undermine — inadvertently or deliberately — American efforts to stop the Dear Leader's nuclear program by offering another patron patsy to play off of its opponents. After all, there are some people who think that if the US is against something — even if it is Obama — then it must actually be good.
Despite French intentions, though, I'm not sure how well a Lang visit will play with the North Koreans. First of all, Lang's not a head-of-state or anything. Kim Jong-il likes pretending he's receiving adulation from heads-of-state, or at least foreign ministers or secretaries of state. Second, Jack Lang is tall, and that makes the Dear Leader very uncomfortable. At 5'7", I would make a far better envoy.
And just wait until Kim Jong-il finds out that his handlers had confused this guy with Jack LaLanne. The ailing Dear Leader had really been hoping for some health tips.
on November 10, 2009