Passing out in Korea (POIK)

Well, it looks like someone has dedicated an entire blog to passing out in Korea. He (?) calls it "Blackout Korea," though I'm not sure if all of his photos are of people passed out somewhere. (One or two look like people who — outside their home late at night for whatever reason — are sleeping anywhere they could find that's convenient; I suspect that, since I've done so myself, and living near Seoul Station, it's easy to find people doing that while waiting for an early morning train. But I digress.) 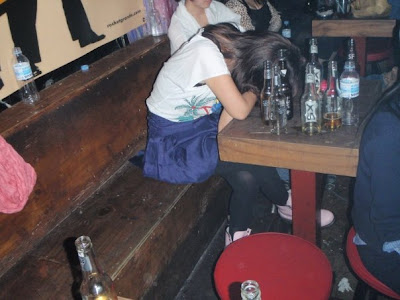 Anyway, I'm not going to steal the guy's thunder by putting up the most hilarious or most outrageous, so just go and check it out. Some of them are downright scary, since you know that the subject of the photo is just or two bad decisions away from death or a serious maiming.
Maybe I'm too jaded, but I find this site more disturbing than amusing. I'm referring to the content of the pictures, not the fact that someone made a blog about it (hell, it's a chronic problem in Seoul's "entertainment districts" and it's worth chronicling — chronicling the chronic heh heh). I see people passed out and I think of the dangers of alcohol poisoning. I see people staggering in or toward the street and I imagine they're about to become roadkill.
I wonder, with some of these photos, like the one of the guy passed out under a truck, if anyone thought to move them out of harm's way. A few years back my future ex-fiancée and I were walking near Itaewon one night, probably no later then 9 or 10 p.m., when we saw a guy drunk and slumped over sitting on the ledge that prevented pedestrians from falling down into the underpass below. He was teetering and it was clear that he could easily fall the twenty or thirty feet to almost certain death (by being plowed into by a car). I went over and told the guy — as politely as I could, since you don't know if he's a sleepy drunk or a belligerent drunk — that this was no place to sit, and I prodded him to walk with us across the street, to where we sat him down in some bushes. I seriously think I might have saved the guy's life that night, though who knows what other crazy sh¡t the guy might get into later.
Okay, then. Back to the spirit of the post. I quite liked this one below, especially because of the subject header: Tom, where is Jerry? WHAT DID YOU DO TO JERRY?! 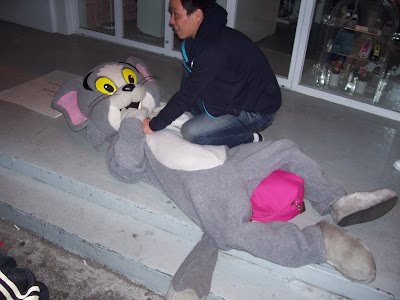 I was wondering why someone would be in a Tom costume in Hongdae, but then I remembered, oh yeah, it was Halloween recently. I guess it's becoming a bigger and bigger thing in Seoul nowadays, though it will never rival the Waikiki Halloween parade along Kalakaua Avenue. 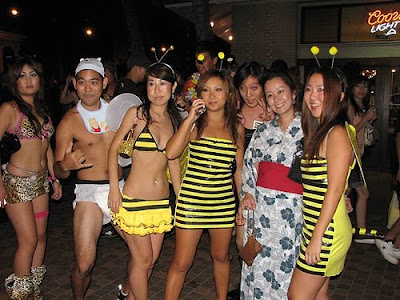 But I digress. Anyway, HT to Brian* for pointing this out.

UPDATE (November 2010):
There has been a bit of an uproar about some of the contributors to Blackout Korea going a bit too far.
* Certain people have whined noted that I put a lot of links to my own site in other people's blogs' comments section, calling it naked self-promotion. What they may fail to realize is that I try to put at least one link back to the same sites, or related ones, for every link I put somewhere to my own blog (and I try to put only very relevant links to my own blog). It's all about sharing and getting things to and from other blogs. And you might note the side bar, while you're at it: I take up some of this blog's most valuable real estate highlighting the recent posts from the same blogs where I leave all those "off-putting" links to my own site.
on November 06, 2009