"A symbol of the latent tension in the peninsula" 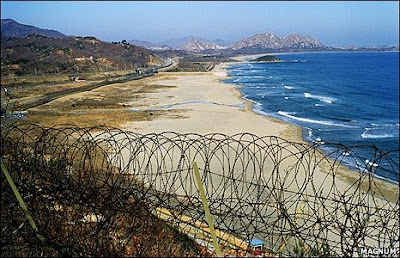 The BBC has an interesting little series on Cold War-era borders that remain standing, as well as borders that have since gone up since the Berlin Wall fell. Not surprisingly, part of the focus is on Korea's own DMZ.
The occasion for this, of course, is the fall of the Berlin Wall twenty years ago. Lots of anniversary stuff related to this. I'm bucking the trend and have decided not to ask people around me what they were doing when they heard the Berlin Wall was falling: Many of the people around me were still in diapers, and some of them were still zygotes.
on November 06, 2009